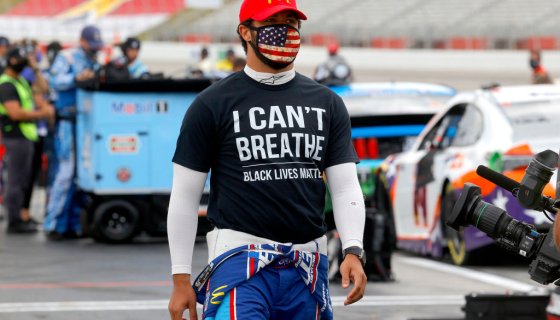 NASCAR has had its share of Black drivers, a path laid expertly by the late Wendell Scott of Danville, Va. Darrell “Bubba” Wallace Jr. is continuing the tradition as one of NASCAR’s top-ranked racers and has just revealed that his No. 43 Chevrolet Camaro will feature a paint job in the wake of him asking for to be banned from the tracks.

Via social media, the Richard Petty Motorsports team that Wallace races for announced the new paint job scheme a video interview that laid out the inspiration for the Black Lives Matter angle.

Wallace shared in the chat with RPM’s graphic designer Bradley Sisson that he was inspired by last week’s “Black Out Tuesday” and worked it out with the RPM team to get the paint job done.

“I think it’s going to speak volumes to what I stand for, but also what the initiative and what NASCAR, and the whole sport, is trying to push,” Wallace said.

The car’s paint job features two hands on the hood, one Black and one white, in a solidarity handshake that Wallace stated in the video chat was an important distinction to make.

NASCAR has done well in introducing diversity programs over the past few years in an attempt to cater to longstanding Black fans of car racing and to also add much-needed variety to the generally lily-white sport.

Check out the video conversation and images of the car below.

A post shared by Richard Petty Motorsports (@richardpettymotorsports) on Jun 9, 2020 at 1:47pm PDT

A post shared by Richard Petty Motorsports (@richardpettymotorsports) on Jun 9, 2020 at 2:47pm PDT