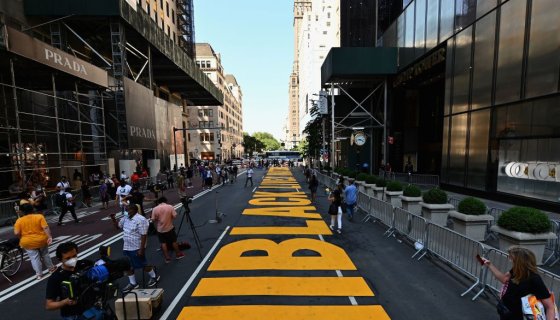 Today New York City in giant yellow letters right in front of the Racist-In-Chief’s Fifth Avenue Trump Tower building in Manhattan. Something that caused after it was announced.

Still his Twitter fingers and fragile as eggs ego wasn’t enough to keep the mural from getting underway and today it finally happened as the Mayor, Rev. Al Sharpton, NY residents and New York City workers put yellow paint to concrete and sent a message to the most divisive President in American history.

Our city isn’t just painting the words on Fifth Avenue. We’re committed to the meaning of the message. #BlackLivesMatter

We’re lowkey surprised that Donald Trump didn’t send the National Guard to protect the street in front of his 58-floor building in Manhattan. Still, there’s a chance if he wins re-election that he’ll just have the street repainted to coverup the mural like it’s a political liability or something.

But for now we couldn’t be more pleased with the project and hope that it stays there from now until the end of time.

Peep pics of the painting below and let us now if you co-sign the move.

From Fifth Avenue to Fulton Street to Richmond Terrace, NYC has a message for the world: #BlackLivesMatter pic.twitter.com/wtkzCHpURm