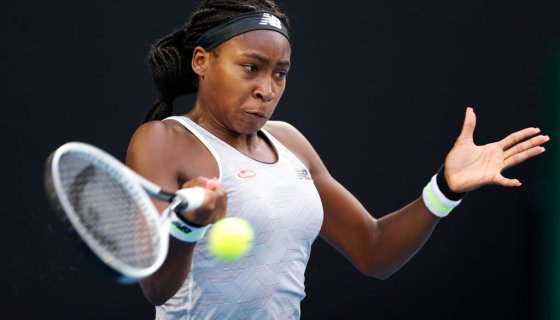 Black girl magic was in full effect in Australia as both and went head to head at the Australian Open.

On Friday (Jan. 24) Coco Gauff defeated defending champion  in a highly anticipated match at the Australian Open 6-3, 6-4 in the third round at Melbourne Park.

Gauff and Osaka’s match came months after Osaka won her second Grand Slam title at the 2019 Australian Open after defeating champion in 2018.

“I think I was more in disbelief,” Gauff said. “I didn’t really know what to do. I was just trying to enjoy the moment and savor the moment. I still wouldn’t say I’m used to this.”

Despite the two ladies displaying an immense amount of talent, Osaka fell short. In the post interview, the former champion attributed her passion to win as being the main reason she lost revealing that she allowed Gauff’s age to psyche her out.

”I was not really swinging freely, and she was,” Osaka said. “It is just tough, you don’t want to lose to a 15-year-old. I have an age problem. I don’t like losing to people who are younger than me, and there is hardly people younger than me. I took this very personally.”

Osaka made 30 unforced errors, Gauff only 17. This seemingly served as a rematch from the third round of the US Open in September; Osaka won that one in straight sets then consoled a crying Gauff afterward and encouraged her to speak to the fans.

“Her serve is way better,” Osaka continued. “I feel like I wasn’t really swinging freely, and she was.”

Gauff, who became the youngest tennis player in the Open era to qualify for Wimbledon’s main event last year, told the on-court interviewer after her win that she was was still in disbelief that she was standing in Rod Laver Arena in Melbourne; but during the match being calm helped her pull off the win.

“I was pretty composed and really calm,” Gauff said. “I’m just thinking about playing ball. I don’t really think about the defending champion and all of this, I just always have that belief I can win, regardless of the opponent.”

Check out some highlights from the match below..