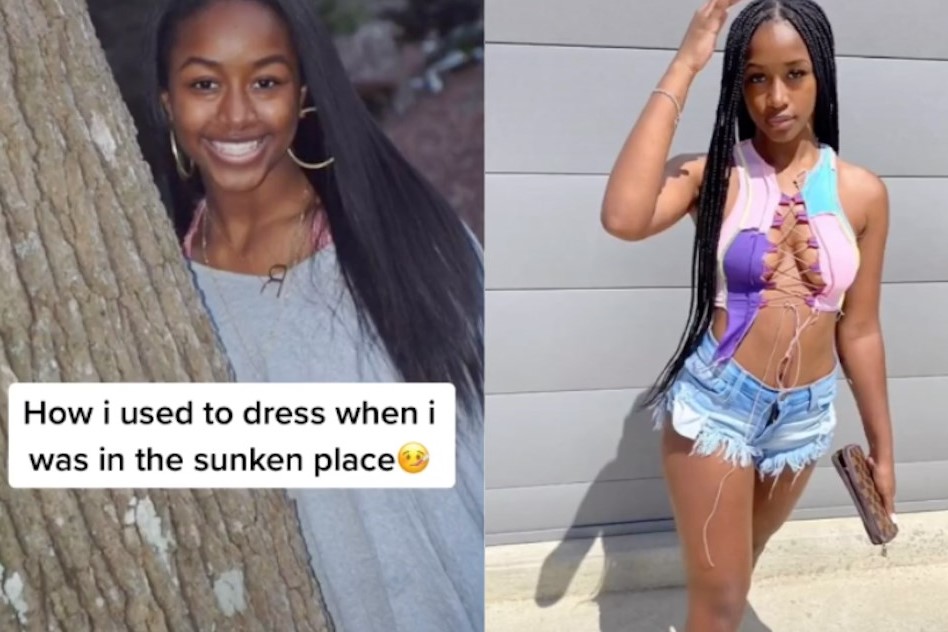 As another week rolls around, so too does a new TikTok trend. With that strawberry dress slowly fading from the FYP, and users mercifully stepping away from the Benadryl, this time around, Black and POC TikTokers are using the app to look back at their ‘sunken place’ sartorial choices as part of a new style challenge.

What does that mean exactly? Let us explain. Starting out as a standard before/after looks challenge set to a remix of the Ben 10 theme and a track from Mean Girls: The Musical, the videos pull together a reel of the looks they used to wear in ‘The Sunken Place’ – which largely translates to white dominated spaces, like the halls of their suburban high schools and colleges.

First seen in Basic Becky Brandy Melville-esque floral dresses, cropped-tops, and cut-off denim shorts, or otherwise All-American preppy polo shirts and slacks in a bid to fit in with their white peers, the videos then flip to ‘look at us now’ mode. What follows are more photographs, only this time each user is getting their life in looks they actually feel like themselves in now they no longer give a fuck about watering things down to make the white people around them comfortable.

In one, TikToker Brooklyn Collier writes ‘Me dressing for white boys in college’ and is seen in a succession of extremely caucasian staple jeans-and-a-nice-top combos, before she flips to a montage of images in which she’s ‘Dressing for myself when I moved to NYC’ – think cute graphic logo tees, baggy denim, and minidresses mixed up with chunky boots and oversized jackets.

In case you need a reminder (or haven’t seen it, in which case, wtf have you been?) The Sunken Place first entered our consciousness circa Jordan Peele’s seminal cult 2017 movie Get Out. In the time since, it has come to be recognised as a metaphor for the oppression faced by Black people thanks to white supremacy and systemic racism, and has spawned countless memes across the course of the last few years.

Along with The Sunken Place trend that’s currently sweeping Donald Trump’s Least Favourite App™, elsewhere, users are celebrating their heritage through another transformative style challenge known as the #FashionEdit. First captured wearing sweats, tees, and hoodies, a musical switch and a jump then sees them decked out in full cultural dress.

Check out a selection of The Sunken Place style challenge TikToks below.

I was def in the sunken place 🤦🏽‍♀️ ##loveyourblackness ##neversettle ##Neverbelessthanyourself ##fyp

So many collars. I was buggin fr ##sunkenplace ##glowup ##transformation ##greenscreen

Some of us are late on the ##GlowUp ##SunkenPlace