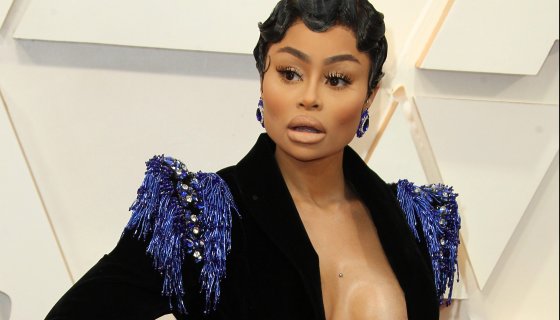 has found innovative ways to keep herself aligned with the struggle, and her latest dip in the pool has Twitter piling on the jokes. The social media star made an appearance on the red carpet that the and her outfit has many firing off joke after joke.

Chyna, born Angela White, was at the Dolby Theatre in Hollywood on Sunday (Feb. 9) surrounded by several stars from the film and television world. Chyna, 31, arrived at the event in a blue and Black dress that featured a plunging neckline and a waist-high slit which showed a lot of legs. Chyna’s hair was cropped short and styled into finger waves and also sported some simple Black heels.

It was the starlet’s first time at the Oscars and was something of a curiosity for many since she isn’t known as an actress nor has a film in the works. At any rate, Chyna’s appearance sparked fans on Twitter to come with the slander and we’ve collected some of those reactions below.

How tf did Blac Chyna finesse her way into the #Oscars?! pic.twitter.com/zKJOtruUN8

Why is Blac Chyna at the Oscars? Was she in Little Women? pic.twitter.com/n9eOmZYXJ7

So since Blac Chyna at the #Oscars, I guess I can too🤣🤣 pic.twitter.com/yJomHLNorp

Ok, but how did Blac Chyna get invited to the Oscars? Cut the cameras deadass. pic.twitter.com/5MoHJ9E8gp

Stop complaining about Blac Chyna being at the oscars as if she and her mother, Tokyo Toni didn’t pour their heart and soul into this performance 🙄🙄🙄 pic.twitter.com/5UALmnL71x

Blac Chyna when they ask to see her invite to the #Oscars pic.twitter.com/VkOLhJPDx8

Everyone is wondering why Blac Chyna is at the #Oscars and I’m wondering why the titties she paid are crooked. pic.twitter.com/lxFJ5SKx3U

these award shows hve changed alot man. u can considerate it positive or negative, its ur opinion.but to me the shows arent fun to watch anymore pic.twitter.com/xoxc6vx5DF