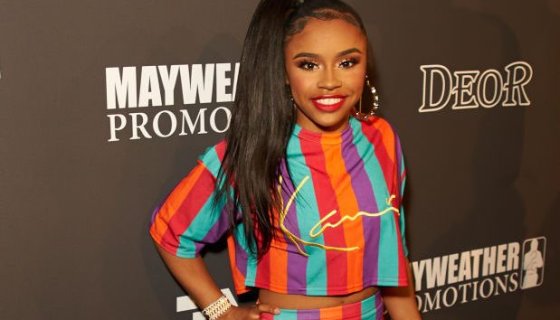 There might not be a greater example of throwing your life away right now than stabbing up her boyfriend’s baby mother. If prosecuted to the fullest extent of the law, the daughter of boxer could face up to 99 years.

The 19-year-old Iyanna Mayweather made a spectacular fool of herself last week when she arrived at NBA YoungBoy’s Houston home to discover that his child’s mother, Lapattra Jacobs, was at the residence. Stories have been swirling that Mayweather and Jacobs got into an altercation that spilled over into a kitchen area where Mayweather stabbed the victim in the arms according to reports.

Mayweather was arrested and jailed, later bonding out with charges announced at a later date. According to a report from The Blast, Mayweather was charged with Aggravated Assault With A Deadly Weapon, which carries a sentence ranging from five to 99 years and a $10,000 fine. Mayweather has retained the services of famed Houston attorney Kent Schaffer, who has represented Scarface, Slim Thug, Pimp C, J. Prince, Chace Crawford, and other notables. Mayweather intends to plead not guilty.

Mayweather’s famous dad seemingly hasn’t said much about his daughter’s predicament, including responding to YoungBoy disrespecting his name in front of Ms. Mayweather during his Instagram Live beef rant against Kodak Black and Jackboy last weekend.

On Twitter, Yaya Mayweather’s name began trending as news of her potential prison sentence went wide with a boatload of slander and reactions coming down as a result.

All Yaya Mayweather had to do was breathe and live off her pops and she woulda been straight for life. What a moron

They gave that girl yaya 99 years if convicted. All over a nigga that smoke cigarettes.

YaYa Mayweather after getting 99 years for a nigga with 5 baby mamas and herpes: pic.twitter.com/tEniuv8mES

Can y’all please use Yaya Mayweather as a wake up call. Everyone glamorizes fighting for men who ain’t shit. Everyone thinks that competing for a man’s attention is regular. That’s shit is whack, immature and outdated. If you’re fighting the girl before the man you need help. pic.twitter.com/Bk0bWnD3lP

When jhene aiko said “ill go to hell and jail about you boy” yaya FELT THAT LITERALLY 😭🥴 pic.twitter.com/urzVA4xv8W

Floyd Mayweather is mourning the death of his baby mother and his uncle and now Yaya has come to disgrace him all in the space of 4 weeks. He needs all the prayer in the world.

Yaya in court after the judge gives her 99 years for stabbing a girl over YB pic.twitter.com/uHqHvmy1fV

YaYa Mayweather facing up to 99 years and a $10,000 fine over an unstable, adolescent boy that called her millionaire father a bitch ass nigga. pic.twitter.com/NrbgMGOMhC

YaYa Mayweather is the true definition of: If fumble the bag was a person. Just clownery pic.twitter.com/nSJti4oQGY

Yaya is a prime example of why being that crazy imma stab a bitch girlfriend is just not the one at all.

Yaya ruined her whole life for a illiterate dented Dr Pepper can that grew up eating crayons with 5 baby mama's before he 21😒 pic.twitter.com/RidynTAneo

Yaya ain't facing up to 99 years because of a man. She's facing that time because she's fucking stupid

YaYa Mayweather was arrested and facing 99 years in prison over a retarted nigga with herpes 😭 pic.twitter.com/gbjTt3pFK4