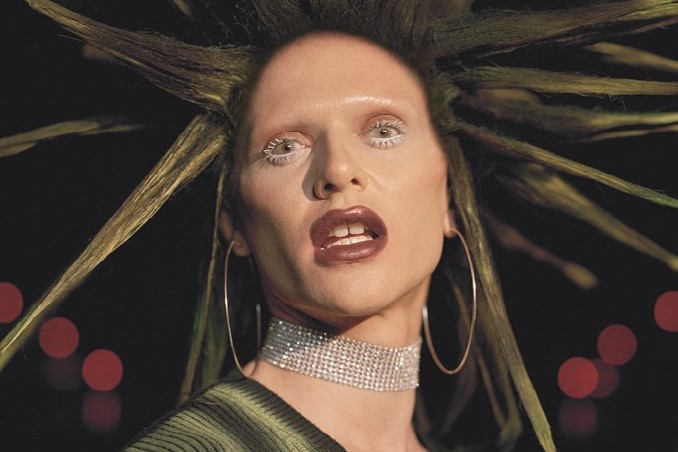 Not a joke, just a fact: Bimini Bon Boulash is a fashion queen for the ages. From their tribute to London nightlife legend Princess Julia and their scene stealing take on Norfolk FC’s football kit, to a succession of looks inspired by fashion renegades including Alexander McQueen and Iris Van Herpen, the East London queen has been tearing up Ru’s catwalk with their thoughtful, avant-garde drag week after week. Last week’s subversive, Swarovski-studded acne-fest? Stunning. Their Snatch Game-stealing, Juicy Couture-drenched turn as Katie Price? Nothing short of priceless.

Now, just a few weeks after taking to the runway as part of Art School’s poignant AW21 show during London Fashion Week, Bimini is back in a new, exclusive editorial and short, cinematic film. With London-based creatives George Oxby on the styling, and photographer Joseph Clarkson stepping behind the camera, the series channels “that gorgeous tackiness that American pop-punk had in the 90s” clashing it with the seductive, gloomy grandeur of Montmartre at the turn of the 20th century.

“I was thinking back to my childhood when my brother would play The Distillers or No Doubt, and how these strong female vocalists were owning what was, up until then, a masculine space,” explains Oxby of the inspiration behind the shoot. “For me, Bimini subverts gender and exudes that pop-punk prince/princess energy, so that’s what I wanted to play on – with hints of cabaret, corsetry, and a touch of eleganza.” Think Marlene Deitrich meets Brody Dalle on the stage of a smoky underground club and you’ve basically got the idea.

The film, meanwhile, taps into the harsh reality performers faced during the pandemic, as live performance was prohibited and previously packed venues laid dark and dormant. “People were scared to leave their homes, so we wanted to create a show they could watch from the comfort of their own beds,” Oxby and Clarkson reveal. “In a time when many of us were dozing the day away, Bimini would be the most exquisite sleep paralysis demon to pop up on your screen.”

Seen lounging on dusty velvet furniture or peeping out from behind heavy curtains, the drag icon is captured wearing a series of looks by rising, avant-garde designers, with standouts including Bruna Ignatowska’s sugary pink ruffles, Stephanie Uhart’s subversive gown, which grows around the queen like a primordial organism, and Carapace London’s Gaultier-indebted conical leather bustier. Make-up artist was behind the queen’s doll-like clumpy eyelashes and gloopy splashes of paint that dripped down their face, with Alistair Jubbs the creative mind behind their towering dual-mohawks and a glittering wig crafted from approx. 10,000 gold paperclips.

With Oxby closing his studio and Joseph furloughed during lockdown, the shoot served as a way of keeping the two, and their team, focused creatively. “We were stuck with nothing to do but channel our energy into creating shoot concepts and planning for the future,” says Clarkson. “We reached out to Bimini as we knew even before Drag Race that they were a star, and we felt like they had that attitude, that punk, that we look for in a muse.”

Taking place at a studio in central London, the day was punctuated by a pretty weird turn of events. “Picture this,” says Oxby. “We walk into the studio after being isolated for months on end. The whole team is excited and ready to go. Out of nowhere, we were graced with an impromptu dress rehearsal performance by none other than Rachel Stevens from S Club 7, who ends up being the backing track to a large portion of our working day. Sweet dreams most definitely are our LA ex.”

With lockdown 3.0 set to lift in a few weeks time, I ask what Oxby and Clarkson have up their sleeves next. “We would love to see fashion continue to become more inclusive,” they say. “If the pandemic has taught us anything, it’s that we shouldn’t take time for granted. If we aren’t seeing the necessary change happening in fashion that we want and crave, we need to start making the work ourselves and pushing forward our ideas.” For those that feel the same? “We’re collaborators. Message us.”

Watch the film above.