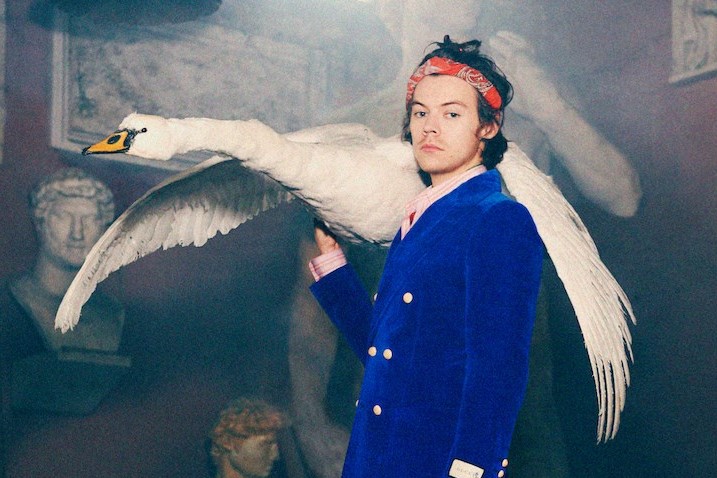 Ouverture of Something That Never Happened makes its debut as part of the label’s first-ever digital film festival, GucciFest

For those who’ve spent the last two days and nights doomscrolling through Trump’s berserk claims of election fraud and endless dismal updates on the UK’s second lockdown (hey!), this morning brings brighter news: Harry Styles and Billie Eilish are set to star in a new Gucci film series.

Directed by cult cinema legend Gus Van Sant and Alessandro Michele himself, Ouverture of Something That Never Happened is set to debut as part of the Italian fashion house’s first-ever digital fashion and film festival GucciFest (what else?) later this month.

Though details are limited right now, what we do know is that the surreal seven-part series features actor and artist Silvia Calderoni as she goes about her day on the streets of Rome, where she bumps into the likes of Jeremy O. Harris, Arlo Parks, Florence Welch, and, of course, Eilish and Styles.

With Styles having previously taken centre-stage in a Gucci tailoring campaign – alongside what his stans would likely consider an extremely lucky chicken – the film marks Eilish’s first turn starring role in one of the label’s projects. Realistically, it was surely always going to happen eventually, though – with the singer frequently seen in full Gucci looks, and debuting its new Epilogue campaign at her livestreamed Where Do We Go? gig last month.

Beyond GucciFest’s star-studded, Van Sant-captained showboat, Michele has also invited a group of young designers to launch fashion films as part of the week-long URL event. With former Dazed 100ers Stefan Cooke, Bianca Saunders, and Mowalola on the line-up, joining them are the likes of Collina Strada, Gareth Wrighton, Ahluwalia, and JordanLuca.

Elsewhere, ICYMI, Dazed also launched a series of short films in partnership with Gucci, inviting the likes of Dakota Fanning, Jodie Turner-Smith, and Emma Corrin to step behind the camera and into the director’s chair. Spanning dreamy tea-parties, contemporary Westerns, and poignant musings on the risk and rewards of love, head here to watch all the shorts from the Absolute Beginners project.

GucciFest launches on November 16 and runs until November 22. Watch it across Gucci’s channels.