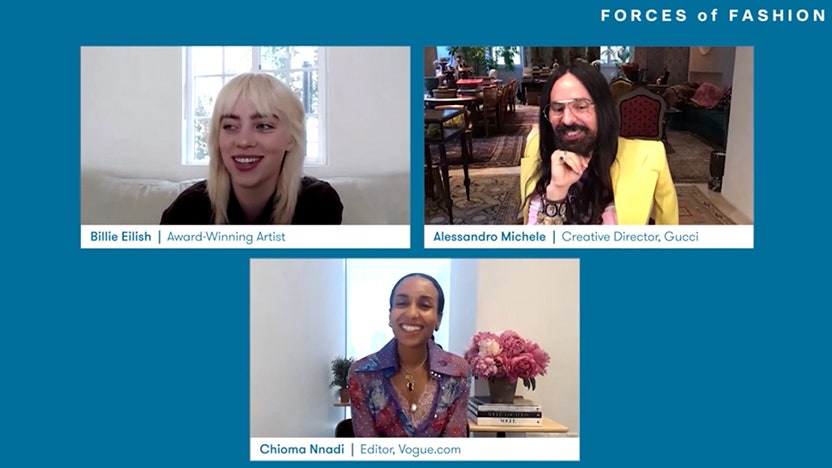 Billie Eilish and Gucci’s Alessandro Michele are practically kindred spirits. Many of the musician’s most memorable outfits were made in concert with the creative director, including the two mesmerizing looks she wore to the Grammys in March. “The process is very natural,” says Eillish, who spoke with Michele for Vogue’s Forces of Fashion conference this year. It’s a sentiment that is echoed by him. “We share a lot of things, maybe more than what we talk about, secret things, and that’s beautiful,” he says.

For their talk, Eilish and Michele reveal the secret sauce to their creative connection which, according to Eilish, is often heightened by casual late night chats. “Because of the time difference, we end up talking at midnight,” explains the musician, who is based in Los Angeles while Michele is in Rome. Regardless of physical distance, these two are undoubtedly on the same plane as creatives and there’s tons on the agenda here. Hear them discuss the changing landscape of gender politics in fashion, their shared love of subversive style statements—as Michele points out, Eilish’s long-standing penchant for wearing masks was a harbinger of things to come—the story behind Eilish’s spellbinding transformation, and that awe-inspiring British Vogue cover.

Head over to Forces of Fashion for more information about how to listen in on their conversation and the other speakers—John Galliano, Demna Gvasalia, and Marc Jacobs to name a few—on the lineup.