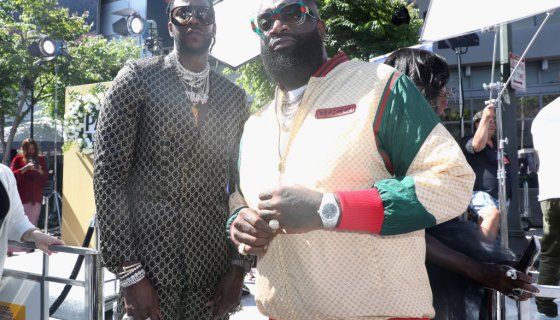 andare two gentlemen who have amassed a considerable amount of fame over the course of their long and still ble careers. The two are set to lock horns in one of the most highly anticipated VERZUZ battles yet next month and fans can’t contain the excitement.

Fresh off a classic battle and a curious clash of styles with , Swizz Beatz, and Timbaland have once again negotiated a battle for the fans with Tuesday’s (July 28) announcement that the Biggest Bawse and Tity Boi are going to square off in August.

Both men have enjoyed considerable growth over the years even with the unconventional paths they had to take to be considered Hip-Hop royalty. Ross, known for his impeccable ear for beats and a commanding flow, might be an early fan favorite but Tity Two Necklace is no slouch himself with hits coming his Playaz Circle crew and his own exceptional work as a soloist over the past decade and more.

The reaction on Twitter is just now bubbling up but the excitement is tangible. We’ve got some of the reactions listed out below.

The Rick Ross vs. 2 Chainz battle airs on August 6 at 8PM EST, airing on Instagram Live, Apple Music, and YouTube.

I wonder how much the woman that says “Maybach Music” makes in royalties? pic.twitter.com/M3tedRm2IQ

Who Y’all Got Winning? pic.twitter.com/sJH30G4bKb

Man if you know me you know I’m the biggest 2 Chainz fan…. while being the biggest Rick Ross fan. If they play the songs I wanna here this might be my favorite yet 🥺. 2 Chainz should just come out the gate with Duffle Bag Boy to set the tone 😂 pic.twitter.com/lIe9fRHvKG

Rick Ross gon have him in the beginning but 2 chainz gonna get him in the end if he plays his music right https://t.co/swUohEIP2t

Rick Ross settled for no reason. He could’ve easily battled anyone. 2 Chainz is too easy. He coulda took Wayne and dare I say Hov

2 chainz is washing him he literally has no bad verses

Rozay runs away with this one..and I love Tity Boi

What happened with @2chainz vs @MeekMill ???
We sweeping that under the rug?…..ok i got Ross

Is this a joke lol. The pairing is odd.
Ross is EASILY taking this.

Now this is gonna be interesting, both got luxury raps, club joints, girl songs, introspective records; along with standout features.

And they mixtapes was crazy!!!! Yeah I'm ready.

@RickRoss verse on ‘Devil in New Dress’ alone has him up by 6 points automatically.

This isn’t a fair competition

The correct answer is @2chainz But everybody wins in this battle