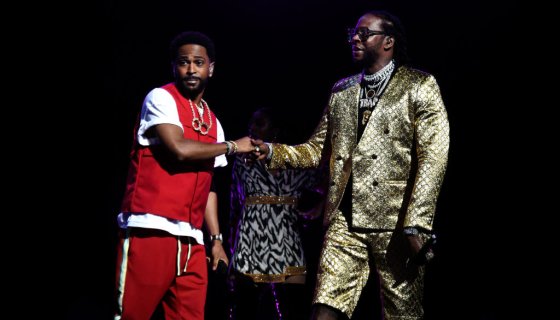 doesn’t play when it comes to music and it seems that longtime friend and frequent collaborator found that out the hard way after taking to Instagram to spark some friendly competition.

Last week, 2 Chainz was seemingly feeling nostalgic after he took to Instagram and posed the question about who fans thought had the best verse on Kanye West’s 2012 hit “Mercy”, which featured , , , and of course 2 Chainz, while pointing out that he felt it was himself.

“No disrespect but I kilt all dem boys,” 2 Chainz captioned the post.

No disrespect but I kilt all dem boys

While many fans agreed with the observation, Big Sean heard about the discussion and quickly had something to say. During an interview with veteran journalist Carl Chery,  Sean decided to give his opinion on who had the best verse, but not before adding that he called directly asking for clarification regarding his comments about his verse “killing” everyone else.

Big Sean also noted that he was the first one to complete his verse, so it was he who set the tone for the song before anyone else could.

“I told him like, n*gga, as far as ‘Mercy’ goes, I was the first one who did my verse on the song,” Big Sean continued. “It was just the beat and I freestyled my verse. I did it without trying and Kanye was the one who loved it so much. I just remember always being in the studio and him telling n*ggas, everybody was on the song, ‘That n*gga Sean went crazy. We all gotta come crazy.’”

Check out the interview and revisit the single below. Let us know who you think had the best verse.