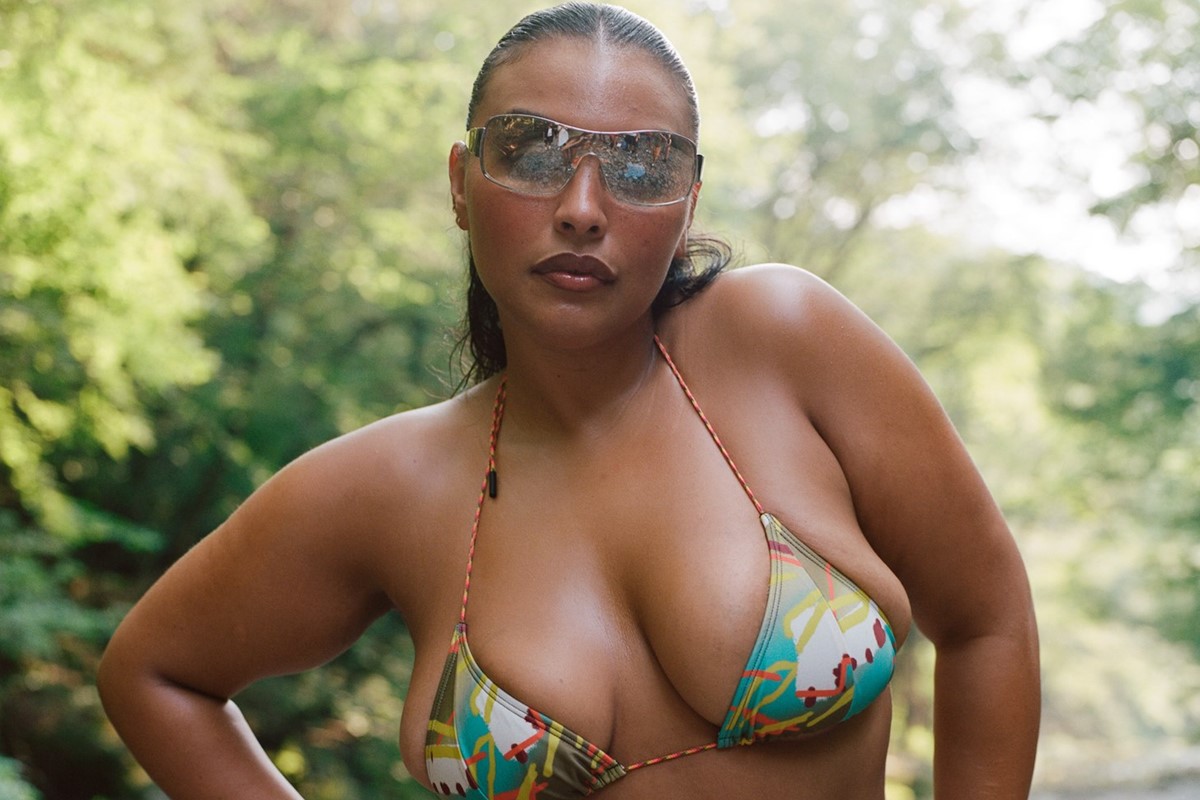 Slipping into a bikini can be a fraught experience for even those with the most steely resolve to love the skin they’re in. From the harsh lights of the changing room sending any semblance of acceptance and gratitude packing, to the moment it comes to actually stripping off, getting nearly-naked in public is imbued with a hell of a lot of *feelings* for just about everyone who inhabits a body.

Although she’s now a bonafide new-gen supermodel, racking up appearances for fashion heavyweights including Fendi, McQueen, and Lanvin – plus the odd groundbreaking cover for Vogue – Paloma Elsesser knows this plight well. “I don’t have super fond memories of these moments when I was younger,” she reveals as we speak over Zoom. “I was never one for wearing a t-shirt in the pool, but I’ve always been chunky so there was a level of discomfort.”

Often telling friends she didn’t want to get her hair wet to avoid swimming, it wasn’t until she got her hands on a vintage Nautica two-piece that she turned a 360 when it came to bikinis. “I finally figured out what I felt good in when I found that set in, like, my junior year of high school,” she says. “I was all about a high-waisted bottom and a naughtier top, and I felt super hot in this bikini. I still have it actually.”

Cut to 2021 and Elsesser is more confident than ever in swimwear, switching out high-waisted pants for tiny string styles, thongs, and triangle bra tops – all of which she’s now turned her hand to designing, as part of a new collaboration with Dos. The NY-based indie swim label was founded by friends Paula Hess and Shay Johnson, with the collab with Elsesser coming together after a chance meeting on a New York sidewalk.

“We run in similar circles as Paloma, and last summer, when everyone was stuck in the city and no one was really travelling beyond the Rockaways, I ran into her on the street,” says former Opening Ceremony designer Johnson. “We’d not seen each other in months so we were on this corner for literally an hour catching up. I don’t even know how we got onto the subject of swimwear, but eventually I was just like ‘we should do a collab!’” Hess, unsurprisingly, was also keen on the idea.

With Elsesser describing this genesis as ‘sacred’, some sort of divine intervention really did seem to be at play. The chance encounter happened just as the Dos designers were preparing to launch extra large sizes, but actually prompted them to expand the line to include 3XL styles.

“We’re a small label that’s really just getting started, so dropping XL pieces was huge for us. But bumping into Paloma was like… actually, we should do something bigger,” says Johnson. “We really want to create pieces that cover in the right places, but that are still really sexy and, like, make your ass look really good. But we know there’s a lot further we can go with that.”

“It’s great to see a brand, and particularly a small brand, try to become more inclusive,” adds Elsesser. “There are plenty of labels with far more money, resources, and capacity to be able expand their sizes, and they don’t. But if two best friends making bathing suits in New York can do it, so can they.”

The collection itself, which the three dubbed Heatwave, takes inspiration from the getaways to upstate New York that punctuated the weird summer of 2020. In a palette of earthy olive, moss, brown, and bottle greens, flashed through with pops of neon coral, punchy bright blue, and juicy orange, teeny triangle tops, sporty bandeaus, and classic bra styles are mixed and matched with barely-there string knickers, cut-out and high-cut briefs, and surf-ready board shorts.

“We really want to create pieces that cover in the right places, but that are still really sexy and, like, make your ass look really good” – Shay Johnson

Details come by way of bolshy, 90s-esque checks, trippy pixelated prints that make the styles appear not-quite fully loaded, and trims that reference a return to the wilderness – many of the bikinis are tied using the kind of laces that look like they could be ripped out of a pair of hiking boots, for example. Elsesser was there every step of the way as the offering came together, with the model joining the designers in testing out each style to ensure the fit worked for a wide range of body types. Speaking from personal experience, it’s hard to find bikinis in bigger sizes that still feel sexy and cool. In Heatwave, the creative trio manage it with aplomb.

The campaign that launches the collection, meanwhile, eschews the typical bikini beach shoot in favour of a forest upstate, where Dos’ diverse cast of ‘cool girls’ congregate. “We wanted it to feel elevated but super friendly, so we really wanted to have our friends involved… but friends who can model their asses off, you know?” laughs Elsesser. “It was important that the casting and the team behind the scenes was representative of the brand, the collection, and its ethos. And everyone totally understood the assignment.”

As the Zoom call draws to a close, I ask who they’d love to see wearing the collection now it’s wild and free, out in the world. Without hesitation and almost in unison, the three designers all respond “Rihanna!” “She’s just like this perfect combination of cool, sexy, and weird,” surmises Elsesser, who’s taken starring roles in a series of Savage x Fenty campaigns and shows. “And I think that really sums up what we’re all about.”

Click through the gallery above and head here to shop the collection.