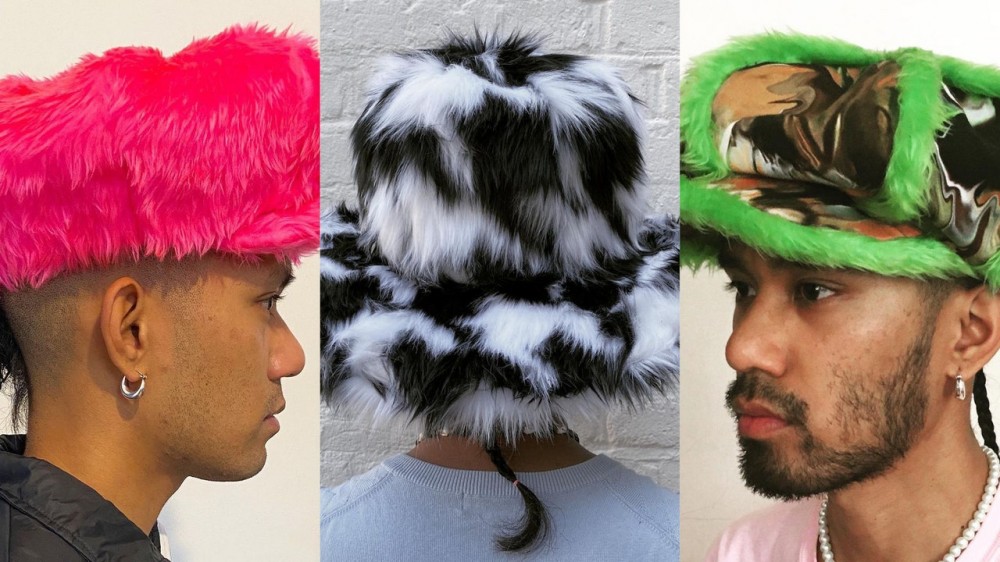 It takes a certain type of person to pull off a hat. Most people don’t wear them every day, and even slightly theatrical hats cause people to do full-on double-takes on the streets (I found this out personally when I put cowboy hats and newsboy caps to the test). But a dramatic, theatrical hat is on another level entirely. Put one on, and you’re immediately the center of attention. Few people know this as well as Benny Andallo, who calls himself a “silly crown designer” and whose otherworldly hats have caught Rihanna and FKA Twigs’s attention. How could they not?

“I never call myself a milliner,” Andallo says. “That’s so old school; I’m actually quite anti-that.” And certainly his creations defy the norms of hat-making. The London-based designer’s colorful, shapely designs, often made with a rainbow of faux fur, have a madcap playfulness about them. Slip one on, and you could walk out naked—nobody would notice. He’s created tapestry-style baker hats trimmed with faux fur, oversized floral-printed bucket hats that droop over your head, and hats with giant cat ears on them. For Andallo, the hat-designing process is a chance to have fun and let his imagination run wild. “A hat is basically a toy—I make adult toys,” Andallo says, adding that music, especially pop and dance music, serves as a huge inspiration for his wacky designs. “I always want to make a hat that I could wear on a night out. My intention always goes back to looking and feeling fab.”

Andallo started making his hats around a year-and-a-half ago, after studying menswear at Central Saint Martins. “I just wanted to spice my head up,” Andallo says. “I was making hats for myself out of different scraps of fabrics; I had loads of fabric from university and from [fabric] hunting.” To this day, he still rarely buys new fabrics, unless absolutely crucial. “I work best when I’m really limited,” he says. “Everything is spontaneous. I’ve accumulated so much fabric, so I work with whatever I have, unless someone orders custom.” His use of his signature faux furs, for instance, began randomly: “I started using that from a jacket that my cousin was throwing out,” he says.

A hat usually takes about a day to make, as Andallo hand-sews everything himself in a studio that he sometimes shares with his boyfriend, the artist Ed Curtis. They’ve even collaborated on hats for special projects, including shoots for Curtis's fashion line. Curtis makes kaleidoscopic, trippy fashion as well, and the two often discuss color and texture when working together. “Color in general is a hard thing for people to put on their body,” Andallo says. But there’s clearly color-lovers out there: Andallo takes the majority of his orders through Instagram, which are constantly filled with inquiries. “A lot of people don’t really wear hats, so I always find it surprising when people buy hats off of me.”

Unsurprisingly, his clientele is mostly creative types—people who aren’t afraid to take a risk and wear a bold hat. “I get a lot of people who just have spicy energy,” he says. “Hats have always been more of a practical thing, they’ve never been seen as a statement piece, which is weird, because when you first look at someone, you look at their head.” Andallo says even when he wears his own creations, he turns heads. “London is gray, so I get a lot of reactions when I’m walking around in one of my hats,” he says. The best part about bringing his hats in the world, however? They bring a smile to people, and can even convert the most unassuming of people into fans. “I have a lot of straight men come up to me and give me a compliment!”