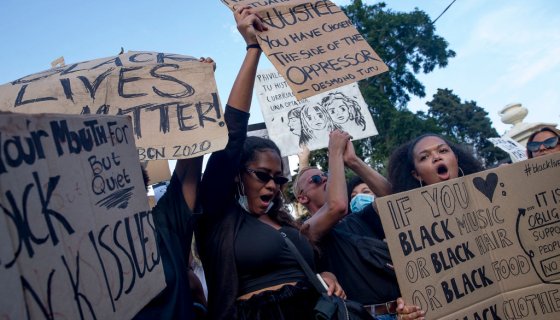 Social media users are partaking in Blackout Tuesday social protests, but their act of solidarity could be hurting the movement in the process.

The protest was initially organized by workers in the music industry, and users have been sharing photos of black squares in solidarity with black victims of police violence. The noble act is also causing a huge issue as well. Instagram users are using the “BlackLivesMatter hashtag in their post’s caption and are inadvertently blacking out posts related to the movement that contains essential information for those in streets and blocking out videos of police misconduct.

Rapper Chuck Inglish and singer pointed out what was happening with posts and retweet a user who shared a video of the #BlackLivesMatter hashtag being taken over by black squares.

my initial thought is it feels dangerous… because once you click on the blm hashtag you’re directed to an overflow of black images, instead of other more useful content people could look at for information. pic.twitter.com/QiaHPeoWGP

Another Twitter user who goes by the handle @anthoknees urged users in a tweet to “stop posting black squares under the #BlackLivesMatter hashtag on Instagram. it is intentionally and unintentionally hiding critical information we are using on the ground and online.”

stop posting black squares under the #BlackLivesMatter hashtag on Instagram. it is intentionally and unintentionally hiding critical information we are using on the ground and online. pic.twitter.com/EIS44aDXXd

Singer Tatianna pointed out that posting off the black boxes is “rendering the hashtag useless.”

Posting black boxes on Instagram and hashtagging black lives matter is rendering the the hashtag usless. Remove the hashtag so actual BLM posts can be seen. #blackouttuesday #BlackLivesMatter

These recent developments are leading some to question the Blackout Tuesday protest organized by two Black women Jamila Thomas, senior director of marketing at Atlantic Records, and Brianna Agyemang, a former Atlantic executive.

So it’s definitely not the ops, but this could definitely be chalked up to poor organizing and not enough information being shared. If you haven’t posted a black square on your timeline yet and are planning to, remember DO NOT USE THE #BLACKLIVEMATTERS HASHTAG.

If you want to help or donate, you can hit these links below: