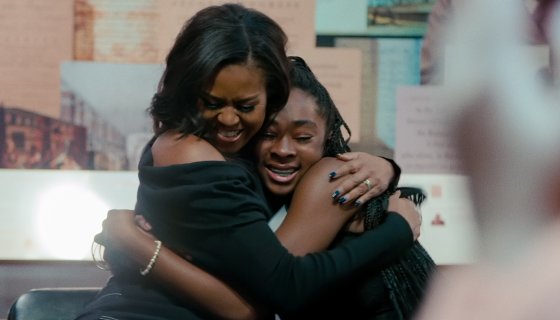 is clearly disappointed with Black people who didn’t come out to vote in the 2016 presidential election, and she’s letting her frustrations known in her

According to the New York Post, says it was a “slap in the face’’ that minorities didn’t go to the polls in 2016 — and has no plans on re-entering the political spotlight amid a push to make her Joe Biden’s running mate.

“It takes some energy to go high, and we were exhausted from it … when you’re the first black anything,’’ Michelle Obama explained in the film, referencing husband Barack Obama’s 2008 Presidential win.

“You know, the day I left the White House, it was painful to sit on that stage, and then a lot of our folks didn’t vote — it was almost a slap in the face,” Michelle Obama continued, talking to a group of black schoolchildren about the devastating results of the 2016 presidential election. “I understand the people who voted for Trump. The people who didn’t vote at all, the young people, the women, that’s when you think, man, people think this is a game.”

continued expounding on the importance of voting in every election, not just the presidential ones, adding that a lot of President Obama’s plans were often halted in Congress due to the lack of votes for representatives who are looking after our best interests.

“It wasn’t just in this election. Every midterm,” Michelle Obama continued. “Every time Barack didn’t get the Congress he needed, that was because our folks didn’t show up. After all that work, they just couldn’t be bothered to vote at all. That’s my trauma.”

The former first lady is the subject of the upcoming documentary “Becoming’’ — produced by the and of the same name as Michelle’s 2018 New York Times best-seller listed autobiography.

In the video series, adds that she’s glad to be out of the White House before quickly noting that she has no plans to run for any political office in the future.

“Now we’re out of the White House, not to be viewed, judged and parceled by every other person on the planet — yeah, it’s better, it’s absolutely freeing,’’ Michelle Obama said. “Being the first lady has been the greatest honor of my life. But how many people are in that position where the entire attention of everything is you, every gesture you make, every blink of an eye is being analyzed? Barack and I are not interested in being at the forefront forever — not even for that much longer.’’

Check out the trailer for Becoming below.