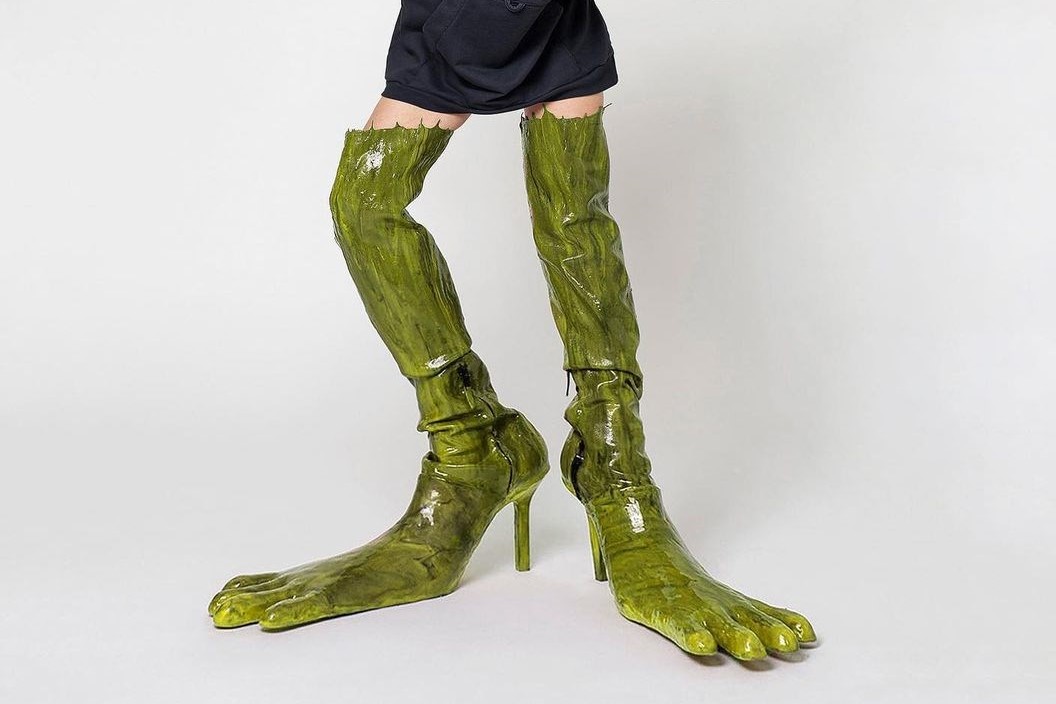 Having collectively spent the best part of a year rotting away in our rooms, who else is scared they’ve passed the point at which they could safely be reintroduced into society? With group interactions strictly limited, the same hoodie and sweatpants combo worn day-in and day-out, and conversations repeated among the same people over and over again, the pandemic has left a plenty of us feeling feral. Place us in a busy bar, houseparty, or gig, and right now, we likely wouldn’t know how to act. Or worse: how to dress.

Producing the only appropriate looks for this apprehensive return to socialisation is AVAVAV, the sustainable label that promises to bridge the future of fashion with the reality of the present day. The label’s recently-released debut collection offers up an array of wearable staples for the post-COVID wardrobe; including wider-than-wide jeans, ruched tailored jackets, and pieces that literally read ‘we only made 21 of these’, all items are crafted from deadstock materials and offcuts. But it’s their truly wild signature four-toed drippy-heels that have captured our attention – with those two extra digits securing their place as a savage contender to Margiela’s Tabi throne.

That the amphibian-like boots are already being memed across the world wide web should come as no surprise, but their appeal goes far beyond gimmick. Throwing it back to the moment humanity first stepped out of the primordial soup, the style also taps appealing into alternate realities and realms. Having spent so much time escaping the confines of our homes through video games, books, and Netflix, returning to the real world in jeans and a nice top simply won’t cut it. That is, unless said jeans and a nice top are matched with a pair of these monsters.

The subversive style is the brainchild of designer and newly-appointed AVAVAV creative director Beate Karlsson, who you might recognise as the person who made Kim Kardashian’s butt a wearable reality back in 2019. The Bloody Feet are a continuation of the claw-like 3D printed silicone shoes she made last year. “As a designer I feel like my biggest task is to provide a new or somehow better perspective,” Karlsson explains. “This being said, it’s definitely not where I always end up, but I want to keep striving for otherness since I think it creates the most interesting work.”

“As a designer I’d be honoured to see anyone rocking the Bloody Feet – ‘cause you’d know it would require some guts!” – Beate Karlsson

Unsurprisingly, Karlsson’s Bloody Feet have proven pretty divisive across social media. “The boots have generally been well received but there are also some strong negative reactions from people being disgusted by them,” Beate tells us. “It’s these strong reactions that makes me feel I’ve gone in the right direction.” Meanwhile, fans include Ru Paul’s Drag Race star Crystal Methyd, who’s reportedly next on the waiting list for a pair. “As a designer I’d be honoured to see anyone rocking them – ‘cause you’d know it would require some guts!”

With Karlsson currently working as a designer for NY label Pyer Moss, she explains that she was drawn to AVAVAV thanks to its sustainable approach to fashion, as well as its ‘creative limitlessness’. “The (fashion) industry stands for around 10 per cent of all pollution – I’ve always thought that if I was going to add something new to a world that is suffering from overproduction, it has to be worth it,” she explains.

With Florence serving as a base for the emerging label, getting its hands on deadstock from luxury fashion houses is an extremely easy task. “We’re able to source leftovers from brands like Rick Owens, Gucci, and Jacquemus while also producing everything locally,” says Karlsson. “The limited transportation we do need to do within Tuscany is all done by electric vehicles.” Each collection is made in extremely small numbers to avoid any further waste.

With Karlsson’s first collection for AVAVAV now on sale, the designer is turning her attention to a small collection of clothing that bastardises some of the most iconic fashion logos on the planet. As for any more standout shoes, she’s keeping quiet. Watch this space we guess, and in the meantime, check out AVAVAV’s inaugural collection – and Bloody Feet – in the gallery above.