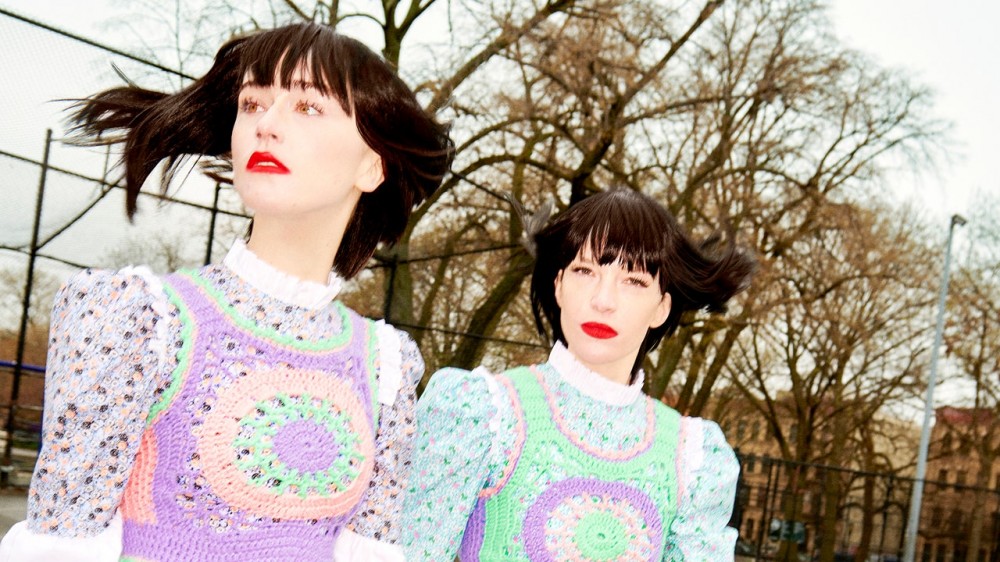 Don’t be surprised if you can’t immediately recognize the two women in this image. Concealing Batsheva Hay and Ella Emhoff’s identities is sort of the point of the Alexei Hay-photographed shoot announcing the pair’s knitwear collab. “A little bit of the fun of it was to mute ourselves because we are so known for a specific look, and so it’s good to have a red lip, a bob, and some real anonymity,” says Batsheva on a group Zoom call. The commonalities between the designer and Emhoff don’t end at their instantly identifiable looks. Both came into fashion design sideways—Hay was previously a lawyer and Emhoff studies fine art and textiles at Parsons.

“I think we had a lot more similarities [than we realized], and it made this process so seamless,” Emhoff picks up. “A lot of our personal design preferences are aligned. Having the bright colors I love mixed with her traditional silhouettes; it was kind of the perfect melding of styles.”

To launch the collaboration, Hay and Emhoff worked primarily over email, text message, and Zoom, meeting up just once for fittings. “There is a certain flexibility that we both have and a certain intuitive way of doing things that makes it easy,” says Hay, with Emhoff adding, “There’s not a real plan, it’s just intuition. It was really nice to work with someone else who works like that because it can be seen as an unorganized aspect, but it’s not. It just happens so stress-free.”

After working on the project for a couple of months, the pair decided to keep the initial collaboration concise, offering just three pieces available for pre-order. A pastel crocheted vest will sell for $250, a ruffle-trimmed corset at $280, and a kaleidoscopic bag at $150. Everything is made-to-order locally in New York with an emphasis on reducing waste. In a previous era, the pair might have hosted knitting circles and hangouts to produce the collection, but for now, their band of knitters will be working safely from home or in studios.

Each designer admits she learned from the other. “I think it was so important to me to be able to work with the knitters; Batsheva kind of opened my eyes to that opportunity and how realistic that is,” Emhoff says.

“Knits are new to me entirely, I’ve only really done a few pieces, so it to work with someone else on it,” adds Hay. “And I’ve definitely not done knit accessories. It was great to feel that we could make just one accessory and put it out there like that.”

Since each style is sold pre-order, it might be a matter of weeks before you see them walking the streets of Manhattan and Brooklyn, but when they’re ready, you will certainly see both Emhoff and Hay wearing their own designs. “What I love about the work that I do is combining traditional design with knitwear, and I think especially the corset piece is the perfect melding of our two styles,” says Emhoff. “What is so cool about the top is that it is so versatile and so it lends itself to both of our audiences who might want to wear it with a big frilly dress or wear it alone with blue jeans.”

With the launch of the collaboration today, the pair look forward to seeing which piece is most popular and maybe considering a second round of collaboration. Needless to say, that one might come with even more dramatic wigs and a selection of inventive, joyous knits.