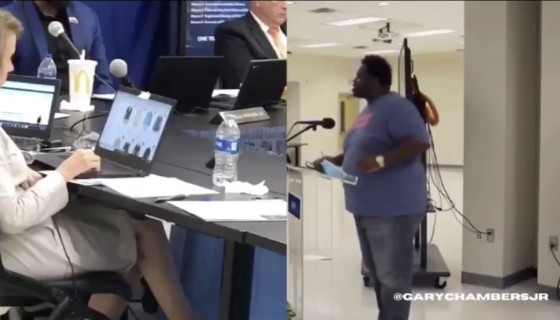 If you’re a Baton Rouge School Board member, it’s a good idea not to be shopping online during a meeting with your constituents. Louisiana’s Connie Bernard learned this the hard way when she got dragged for all the filth by an eloquent and fiery Black activist named Gary Chambers Jr.

Reportedly, the District 8 school board meeting was to discuss the removal of the Lee name from Lee High School, which was already a barely sanitized removal of the Robert E. Lee name. In case you haven’t been paying attention, .

When brother Chambers took to the mic on Thursday (June 18), he was ready, and had all the time. He called out the racism of Connie Bernard being spotted shopping online while the public was airing out their issues.

Not only did he demand her resignation, he began calling out members by name and taking them to task.

“This is a picture of you shopping while we’re talking about the history of racism in this country,” said Chambers. “You don’t give a damn.”

After a quick lesson about the brutality of Robert E. Lee the slave master, he added, “You should walk out of here and resign and never come back,” said Chambers, “Because you are the example of racism in this community. You are horrible.”

Previously, Bernard told the media those who took issue with Robert E. Lee needed to brush up on their history (Lee was a great general, for the traitors, and he lost). Well, Bernard’s response on Thursday night was to get up and walk out. Chambers was unbothered and kept going. And it was glorious—the clip he shared went viral and was even shared by the likes of LeBron James.

According to TMZ, Bernard said that what was seen was a pop-up advertisement that she couldn’t close fast enough. Umm, it’s 2020 and you’re still getting pop-ups that take over your entire browser screen?Sure. Anyway, the board voted unanimously to form a committee to come up with new names for the high school.

Oh, and Brother Chambers will be on MSNBC’s Morning Joe tomorrow morning (June 21)

Humbled by the support from around the country.

Excited to be having a conversation on @Morning_Joe tomorrow morning, to discuss the importance of renaming buildings and institutions after Black Americans. We’ve got work to do! #KeepPushing