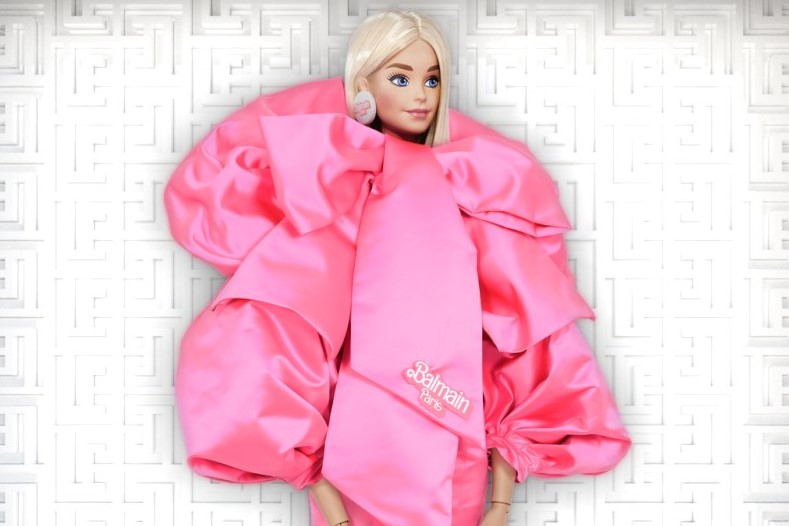 Can someone check on Jeremy Scott?

Jeremy Scott is fuming! After all the groundwork he had done sending out literal human Barbies down the runway for SS15? Being immortalised as a Ken doll in a special Barbie collector’s edition? Personally awarding Barbie with the 2021 Fashion Icon award at Arab Fashion Week? And this is how she repays him? By collaborating with Olivier Rousteing at Balmain? Cue Scott’s plastic-free era!

This is, of course, simply conjecture. Moschino and Barbie are obvious admirers of one another, much like Rousteing, who sat Barbie and Ken front row at Balmain’s digital fashion show last year and once designed clothing for Mattel’s Claudia Schiffer doll. This time, however, there is no doll involved. As was unveiled this morning, the French designer has crafted a 50-piece unisex capsule collection modelled by avatars but made for adults.

It’s a marriage of silly pop culture and couture reminiscent of Balenciaga and The Simpsons, which was one of many eye-popping collaborations last year to set the tone of contemporary fashion. Here, there are broad-shouldered, sequined mini-dresses, strapless mermaid gowns, silk satin suits, and doll-like pyjama sets. All of which have been cut from baby pink, hot pink, and bubblegum cloth, naturally. Rousteing has even reimagined his now-iconic Fabergé dresses (from AW12) in magenta Swarovskis. Alongside the IRL collection, Barbie x Balmain will include three NFTs of one-off looks to be auctioned online, each of which comes with a doll-size physical design.

“For me, it’s a lot more than just a commercial project. It’s very emotional,” Rousteing told the New York Times, reflecting on the shame he felt playing with Barbie dolls as a child. As such, the majority of the collection is meant to be genderless. “Having Barbie in my Balmain army, making a collection inspired by her where there are no boy clothes or girl clothes, is my small revenge. I think Barbie represents a joyful dream world. There’s nothing wrong with a dream. But let’s push the dream, and not the dream of the 1950s or 1960s, but 2022.”

The capsule collection will be available worldwide on January 13.