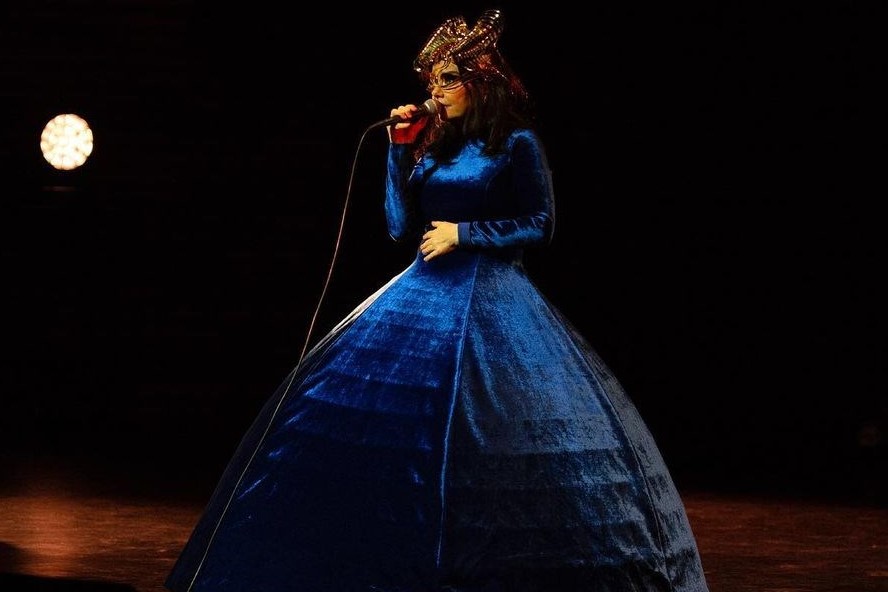 The singer expands her bjönkers wardrobe with a little help from Demna Gvasalia, Tomo Koizumi, and Marine Serre

From Alexander McQueen, to Rei Kawakubo, and Hussein Chalayan, throughout her career, Björk has projected her own ethereality onto fashion’s most avant-garde designers – once demanding Christian Lacroix to open his atelier on a Sunday so that she could order a couture look. Stylewise, the musician has consistently been attracted to dramatic, body-contorting silhouettes, embracing clothing for all of its wild, transformative potential.

As she embarks on her much-delayed Orkestral tour in Iceland, Björk has stepped onto stage in a coterie of pieces from indie brands like Marine Serre, Iris van Herpen, and Tomo Koizumi, her fashion patronage coming to its zenith last night in a blue velvet, hooped-gown from Balenciaga’s SS20 collection. Surrounded by an army of all-white wearing choral singers, the singer delivered stripped-back renditions of “Human Behaviour”, “Cosmogony”, and “Oceania”. Even her accordionist was dressed in a Maison Margiela shirt and Comme des Garçons skirt. And while her self-presentation remains wonderfully unpredictable, Björk’s fashion choices continue to be crowned by a rotation of celestial headpieces created by James Merry.

It marks a rebirth of sorts, given that the singer has – rather regretfully – come out of lockdown hibernation. “I never had such a great time,” she told Icelandic radio, adding that she had “not been that pumped since I was 16”. “Waking up every day in my bed, always so surprised and grounded and calm,” she continued. Fittingly, her next album travels back through this period, made “for people who are making clubs at home in their living room”. In terms of what to expect, she described the record’s sound as being like “a man who was headbanging, then sat down again and had another glass of red wine, and everyone is home by 10 o’clock, done with the dancing and everything”.

Check out our cover shoot with Björk here and conversation with her collaborator James Merry.