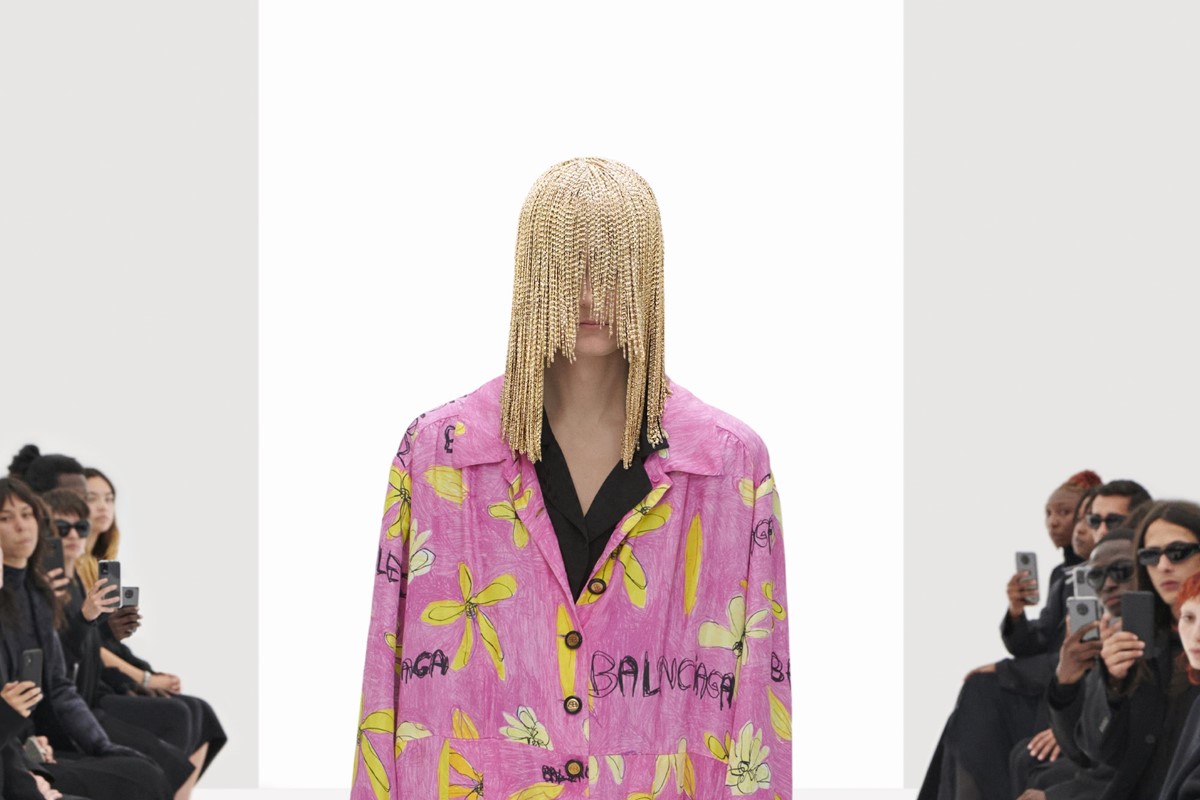 Earlier this year, Gucci’s Balenciaga “hack” saw Alessandro Michele present his take on the label’s outsized silhouettes, splashing them with the Gucci monogram and all of the house’s usual trimmings. Today (June 6), Balenciaga retaliated with a hack of its own for SS22.

Unsurprisingly, the second stage of the Kering crossover featured a taste of the logomania we saw the first time around. A Gucci handbag was cheekily defaced with white graffiti, reading: “This Is Not a Gucci Bag.” Elsewhere, Demna Gvasalia’s iteration of the Gucci monogram subtly swapped out the double-Gs for double-Bs (see also: the oversized BB belt buckle).

If the colliding house codes didn’t already have you questioning reality, the rest of the collection explored how technology alters our perception of the “real” world, making it difficult to tell the difference between fiction and fact.

By way of illustration, we got everything from a sweatshirt that shows the Simpsons wearing last season’s Balenciaga, and models carrying Tesco-esque shopping bags, to a Divine-inspired ballroom gown and silky chainmail headpieces (continuing the label’s fascination with all things medieval).

How Mulberry is reinventing heritage and inspiring a whole new gen

The SS22 show itself also got pretty hyperreal, featuring an army of clones based on the artist (and Balenciaga fave) Eliza Douglas. Presented in a video by Quentin Deronzier, some of the digital doubles came courtesy of everyone’s favourite creepy tech, deepfakes, while others are models with her CG-captured face grafted on. In the end, even Gvasalia couldn’t tell the difference between the fakes and the real thing, he tells WWD.

Even the minimal runway video featured high-tech post-production such as machine learning and 3D modelling, “in order to achieve a hyper-realistic effect”. Hopeful sometime soon we’ll be able to create that hyper-realistic effect for ourselves by, you know, actually being there in person.

Take a closer look at Balenciaga’s SS22 Gucci “hack” in the gallery above, and watch the presentation below.