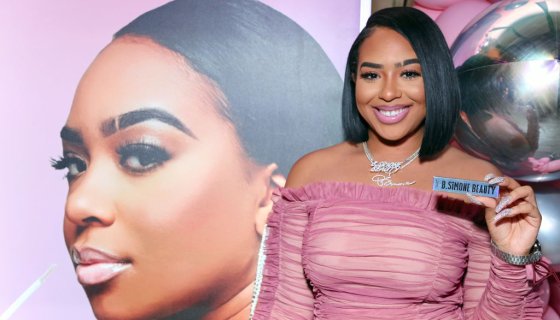 B. Simone is having a rough summer, and she can’t blame no one but herself.

Simone already felt the wrath of Twitter when she opted to let go, and let God instead of going on across the country and world.

“I’m not living to please man I’m here to please God at the end of the day i am a CHRISTIAN,” B. Simone said. “I’m God fearing i have to answer to Him ! I’m going to ask myself WWJD not what would an angry black woman do ! I am angry but i am also trying to be Godly.”

That was literally at the end of May, now just days letter she is getting dragged once again, this time for her dating preferences. During an interview with her Wild ‘n Out boss, on his morning radio show, Nick Cannon Mornings, the 30-year-old “Manifest Queen” was asked about what kind of man she was looking for, and she told Cannon:

Canon then asked, “So you want CEO status?”

Simone doubled down and explained:

No wonder she loves DaBaby.

Anyway, her preference, which she is entitled to having got her in hot water again mainly with 9-5 Twitter who feel Simone is shaming them for punching a clock and not living the #nosleep like herself.

B Simone sounds dumb. You don’t want a man that works 9-5, but you want a CEO!?! You think CEO’s are sitting on they ass making Instagram videos? Them niggas be working 60+ hours a WEEK! pic.twitter.com/brYhCjaYjJ

B. Simone has seen all the digital vitriol coming her way and has responded her Instagram Stories and standing by what she said. She is also on a blocking spree as well. We think she is going to be blocking people for a long time because she upset a whole bunch of 9-5ers.

Hit the gallery below to see all of the responses to her desire for entrepreneurial men only.

Bro but B. Simone would STILL have a 9-5 if it weren’t for Nick Cannon 💀

so what does b simone do for a living?

Can you imagine having to be up for work at 6am and hearing “BABY BOYYYY” at the top of her lungs at 3:45am

B Simone: *clowns people who has 9-5 jobs after we cancelled her last week for being a c**n* pic.twitter.com/GfNkFDig2J

Why do entrepeneurers think entrepreneurs make hella money? The average lifespan of a business in America is not long, especially if it’s black owned and/or small. If Instagram shuts down tomorrow B.Simone check is gone. https://t.co/coNtX1WKRV

I don’t agree with what B Simone said about not wanting to date a man with a 9-5. Although that’s her opinion, I don’t see nothing wrong with a man who works. Not everybody has to be an entrepreneur.

B Simone is a coon, not funny, and she clowns folks with 9-5 jobs, that’s 3 strikes, get her outta here

B Simone a grown woman with slits in her eyebrows. You really think she’s gonna have anything of merit to say?

B.Simone talking about she’ll only date a CEO but she got “rich” off selling repackaged AliExpress gloss and begging y’all every day to buy it.

Tell B Simone I don’t clock in cause my job pay me salary pic.twitter.com/NMbQsEfvMV

really confused on this false narrative that having a 9-5 means ur not on ur grind? If anything those are the ppl w the strongest work ethic so babygirll is b. simone good??

B Simone saying she only wants to date a CEO and not a man with a 9-5 is very problematic and fetish-y.

Being a CEO doesn't equal "rich". In fact, most businesses aren't profitable until their 2nd/3rd year. A lot people that work a 9-5 have more money and time than a CEO.