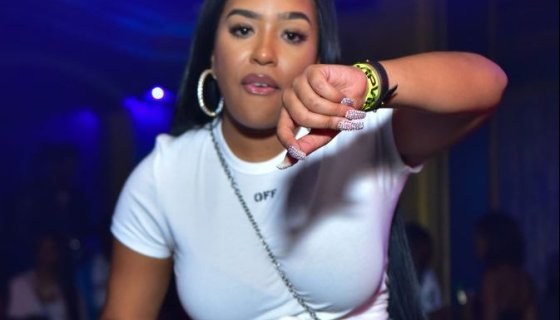 is the latest celebrity who has felt the wrath for seemingly choosing to stay quiet during protests.

On Saturday (May 30), the social media star took to Twitter to share her thoughts on the civil unrest going on across the country and specifically Black Lives Matter. In regards to the overall current state of events, B. Simone called out allies and non-people of color for their lack of response in the fight for justice, calling on them to get involved outside of sharing memes online.

“Doing your part is more than social media,” B. Simone wrote. “Doing you part is loving your neighbors, praying for the enemy, calling your blk friends N Checking on them , signing petitions , donating , meditating , looking in the mirror and becoming better. B4 i try to lead let me examine myself!”

Doing your part is more than social media! Doing you part is loving your neighbors, praying for the enemy, calling your blk friends N Checking on them , signing petitions , donating , meditating , looking in the mirror and becoming better. B4 i try to lead let me examine myself!

But when fans asked for her official position on the protest, Simone became less vocal stating she needed to think “what would Jesus do” before choosing to speak out,

“I’m not living to please man I’m here to please God at the end of the day i am a CHRISTIAN,” B. Simone said. “I’m God fearing i have to answer to Him ! I’m going to ask myself WWJD not what would an angry black woman do ! I am angry but i am also trying to be Godly.”

I’m not living to please man I’m here to please God at the end of the day i am a CHRISTIAN ! I’m God fearing i have to answer to Him ! I’m going to ask myself WWJD not what would an angry black woman do ! I am angry but i am also trying to be Godly

Of course, her reaction angered quite a few fans who called out the online entrepreneur for not considering her faith when doing skits online for entertainment.

how b simone too christian to help speak and act on blacklivesmatter but can shake her ass & allat other shit ON A DAILY pic.twitter.com/TcNgmFys7h

B. Simone is joining the long list of Black celebrities getting canceled and questioned over their silence during protests. , caught heat after victim-blaming the Black community for the death of George Floyd before calling out protestors for not being “specific” with their calls against police brutality.

“I think when we see these situations, I think we also have to understand that we have to get very specific,” Lil Wayne said. “And what I mean by that is we have to stop viewing it with such a broad view, meaning we have to stop placing the blame on the whole force and the whole everybody or a certain race or everybody with a badge. We have to actually get into who that person is. And if we want to place the blame on anybody, it should be ourselves for not doing more than what we think we’re doing.”

decided to join the cancel party by suggesting Rosa Parks could have “taken a cab.”

As the list of canceled celebrities continues to grow, Twitter had plenty to say about it, making sure to keep tally of those not utilizing their voice but using the Black community for support.

After attempting to explain away her error, B. Simone ultimately doubled down on her response by posting a video of her protesting with others in Atlanta.

I’ve never cared for B. Simone I know a corny hoe when I see one.

I’m just now seeing the tweet where B Simone said she can’t be canceled because she doesn’t need “a damn app”, when her fame and millions have come from social media.

B Simone is a prime example of blk’s who just go to church,read whatever verse the pastor wants to discuss that service then go home and never pick up the word again..people that actually read on their own will know GOD doesn’t like cowards AT ALL & defending your temple is law.

the whole B Simone situation it just worrisome bc she literally screams in the phone camera as “comedy” but when it comes to something that directly impacts your community you tambout “wwjd”. you sound dumb as dick.

WWJD? How about when Jesus went and trashed the temple of Jerusalem John 2:13-16 … you can be angry. Don’t bring Jesus into this cause Jesus rioted once as all Ms B.Simone. You and Desi should attend bible study. https://t.co/WKICBn587J

B.simone just pissed me off. Bitch can be loud about sucking dick but when it come to being loud for her people bitch gone try to say god wouldn’t want her to.

B Simone in two weeks after losing all her social media followers after saying today she doesn’t need twitters validation pic.twitter.com/ZOU4MuaqIV

B Simone like bitch are you dumb?? Social media gave you your career and it can literally take it away. If you’re looking for things to worry about start with why your lip glosses take 21 business days to process tf

B Simone be on national TV talking bout sucking dick but fighting racism is where her Christianity crosses the line and also Desi be on SOCIAL MEDIA talking about hood niggas but forgot how to be one when it's time… pic.twitter.com/VQbvbUP9dJ

Knowing Nick Cannon…B. Simone might not have a job next week. He was out her protesting and marching in Minnepolis during a pandemic and he has LUPUS!! and you on the internet being a c**n. She is embarassing

people like b simone & desi banks love saying this just an “app” like this app don’t pay they bills. pic.twitter.com/HF50b9VwrQ

B. Simone really brought her ass on here and claimed to be a “good Christian gal” after throwing her cooch and throat at DaBaby for a year online? pic.twitter.com/26NdIn8VOb

As soon as B. Simone made millions off of y’all, she turned around and called y’all “angry black women” pic.twitter.com/6BVHoK8nl7