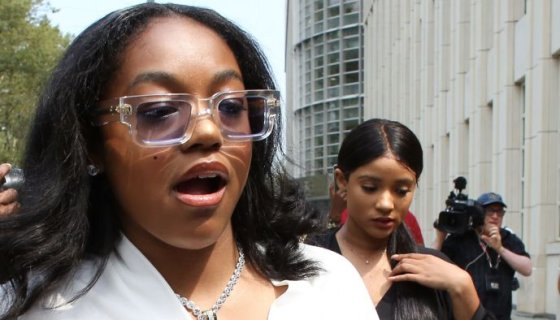 Azriel Clary has escaped. The former girlfriend of disgraced singer R. Kelly is reportedly speaking to the Feds about his allegedly illicit behavior.

TMZ reports Clary is cooperating with investigators in regards to the Pied Piper’s federal crimes case in New York City.

Initially, Clary was said to be interested in cooperating but wary since she had blatantly lied to investigators in the past. Since leaving the shroud of R. Kelly, she has admitted to lying for the sake of protecting the crooner.

Reportedly, Clary has totally cut ties with R. Kelly, and now she’s singing. Recently, Clary claimed that . She also described how he would blackmail his victims in order to keep them quiet.

Since she’s now sharing the tea, Clary and her family have allegedly been receiving death threats. She’s also been getting plenty of online harassment, too. But, Clary is still pressing on while the Feds are monitoring the harassment.

Late last year, Clary moved out of R. Kelly’s Chicago condo but was confronted by her former co-girlfriend Joycelyn Savage. They ended up getting into a fight (on Instagram Live), and though Clary responded in kind with the hands, . Recently Savage shunned her own mother after she approached her after a court appearance.

As for Azriel Clary, she has been reunited with her family.

suprise🥳 Let the healing process begin. Love yall and thank y’all ❤️I even thank everyone who follows me.. because you all believed in me when I could not believe for myself. 🙏🏿🦋 #movingontobetterdays P.S – everyone will be posting there own fav photos so make sure y’all follow the family! #ontherunwithazriel