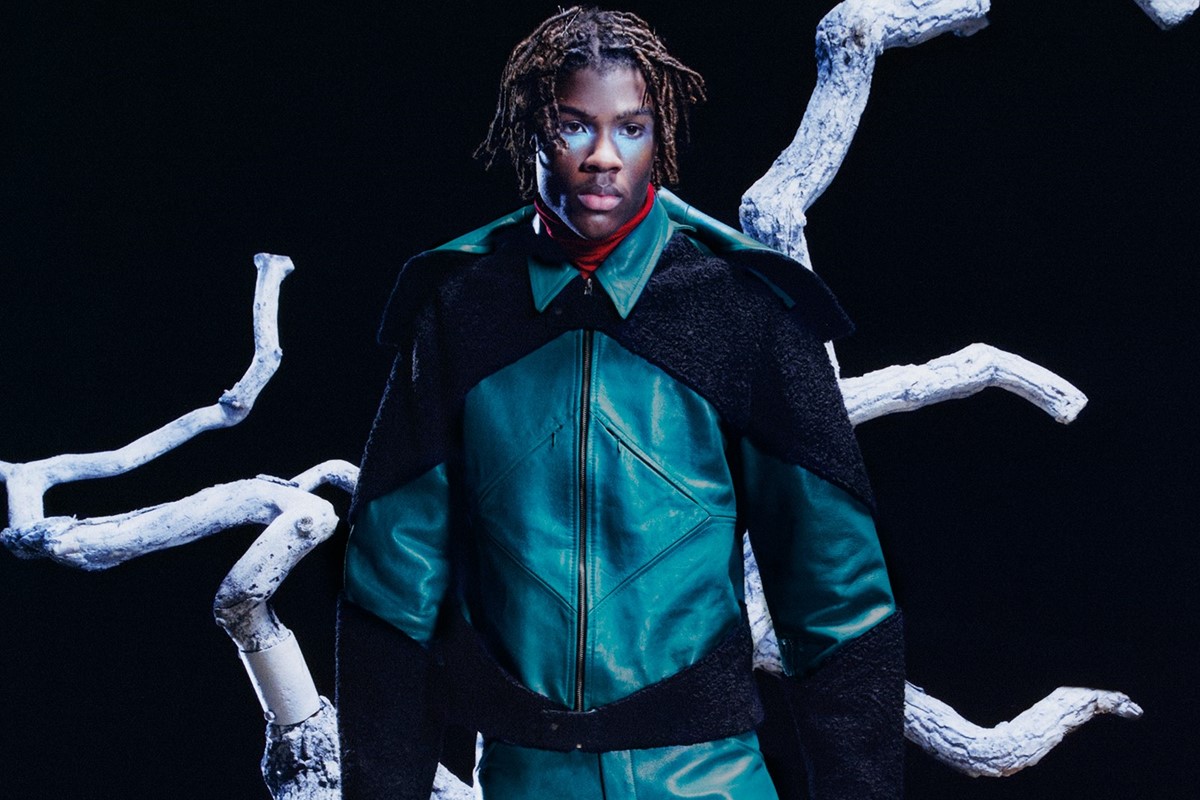 For centuries, the moon has come to represent mystery and intrigue. From its earliest depictions in popular culture, its cratered surface has inspired countless films, books, and songs. In the context of lockdown, it embodies freedom and exploration, a symbol of our pent-up desire to escape to far-away places. “I always associate space with freedom, infinity, dreams, and the future,” says Antonio Vattev, whose AW21 collection draws on sartorial tropes of early space exploration and sci-fi. “These are a thing that I feel our generation is missing and needs nowadays.”

An ode to the 70s, “when space was the future”, the collection imagines a colony of retro-futurist spacefarers clad in satin puffer jackets, corduroy poncho hoodies, green leather tailored jackets, and oversized cornflower blues suits. Frayed denim two-pieces double as spacesuits, while diamond motifs on knee patches and cut-outs on corduroy tank tops nod to the glitchy computer screens in Nicolas Roeg’s cult 1976 film, The Man Who Fell to Earth. “The Man Who Fell to Earth with David Bowie was the key movie that combined all the elements in one,” he explains. “Watching the movie and listening to Bowie’s music from the 70s really helped me to build up my imaginary world. The silhouettes and textiles are a reflection of this.”

As with Vattev’s previous collections, which draw on 70s fashion icons like Mick Jagger and Grace Jones, functionality and elegance are the top priority, with utilitarian silhouettes built from geometric patterns that give off optical illusions to otherworldly effect. Striped jersey tops and floor-length shirt dresses layered with argyle crochet tops mark the London designer’s first foray into womenswear, though they retain a distinctly adrogynous, extraterrestrial feel. “The diamond reconstructed knit dress is an extension of our men’s reconstructed knit shirt, which is one of the collection’s main pieces,” he explains.

Like his AW20 collection, characterised by polished tailoring and irregular patchwork inspired by the sensual curves of Georgia O’Keefe’s flowers, Vattev incorporates Halishte wool fringing onto his jackets as a nod to his Bulgarian heritage. “The Halishte is a unique textile from Bulgaria,” he explains. “It’s handwoven and hand-dyed wool. We have people who helped us source this material from small villages in the Bulgarian Mountains. I reconstruct and upcycle the material into different garments or accessories each season.”

Set within the confines of a blue monochrome room, the corresponding campaign video feels distinctly 70s. The stylised clip shows Vattev’s models pose in front of big, circular spotlights to a soundtrack of Franco-American music duo Faux Real’s remix of Valya Balkanska’s “Izlel ye Delyo Haydutin” – a Bulgarian track that was launched into space as part of the Golden Record on NASA’s Voyager 1 in 1977. “As a child, I collected a magazine called Biograph which had articles about inspirational people in all different fields. This is where I first came across Neil Armstrong on Apollo 11,” Vattev says.

By combining retrofuturist elements of 70s space travel with modern tailoring, Vattev’s collection transports us away from the monotony of lockdown living, casting new and imagined futures of extraterrestrial worlds inhabited by chic, disco-dancing astronauts. With enough cosmic allure to fuel a spaceship, the garments, like Bowie’s Starman, ooze with cool. Vattev might have only been on the London scene for a couple of years, but if this collection is anything to go by, he’s ready for blast off.