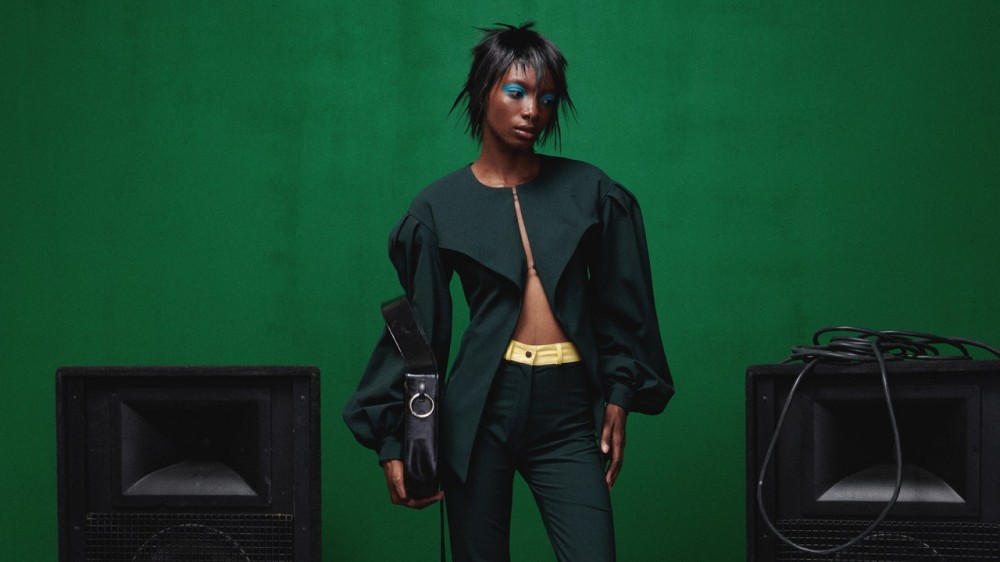 Born in the ’90s, inspired by the ’70s, and emerging in the 2.0 2020s, Antonio Vattev is one to watch. With only two colleagues working alongside him in his Oxford Circus studio (courtesy of the nonprofit creative incubator, V.O Studios), Vattev still very much counts as a fledgling talent, and only one of many in one of fashion’s most fiercely competitive ecosystems. However in just a few seasons this Bulgarian-born Londoner has shaped the promising beginnings of a distinct signature via the diamond diagonals cut into his menswear that reflect both his initials and brand name—AV Vattev—and make for a recognizable visual language whether you know that name or not.

This season, Vattev has introduced a small capsule of womenswear alongside his men’s collection. And as with so many other at-the-beginning masculine-specific designers before him (Jonathan Anderson being the prime example), this gender-defined recontextualization of Vattev’s creative output has proven semi-revelatory. Transposed into his foldover, pyramid patched wrap dresses and skirts, his pleather bras lined with Bulgaria-sourced vintage halishte fringed fabric, crop tops in more halishte, and some deep neckline silk hoodies, the designer’s aesthetic appears at a stroke much more spontaneously expressed. In a collection referring abstractedly in print to Hockney’s dappled A Bigger Splash swimming pool surfaces, and in silhouette to the ’70s aesthetic Vattev was steeped in by his music-loving dad as a boy in their hometown of Stara Zagora, the womenswear feels like a formerly missing circuit that electrifies the whole.

Vattev was trained at Central Saint Martins, during which time he worked in retail at Dover Street Market and then as a junior menswear designer at Saint Laurent, coinciding with Anthony Vaccarello’s first men’s collection there. Of this experience he said: “I was there for seven months, and was lucky enough to work on three collections. I was especially lucky in that the team was very small, so I had the opportunity to witness and touch every step of building a collection, and this taught me a lot. Something I have tried to copy and paste is discipline: you have to be extremely organized about everything else in order to free up time to work on the collection itself—when you organize, you make time.”

This pragmatism bodes well for a young designer whose work—especially in this first edition of AV Vattev womenswear—looks ripe with puckishly empowering potential.