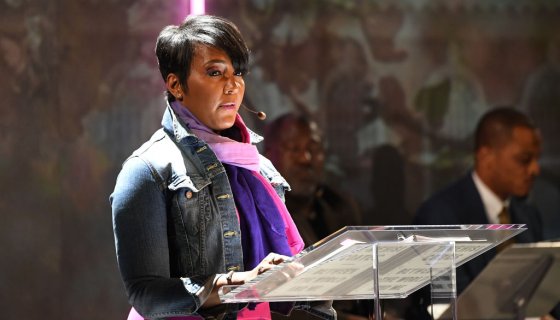 Atlanta Mayor was on the receiving end of a racist cyber attack against ‘s plan to prematurely partially reopen the state amid the coronavirus pandemic.

On Wednesday (Apr 22), Mayor Bottoms took to social media to share a racist text message she received after she made the announcement that she not only did not support the governor’s decision but also called for citizens of to remain at home.

“With my daughter looking over my shoulder, I received this message on my phone. I pray for you,” Mayor Bottoms captured the screenshot posted to Twitter. “‘Conscientious stupidity or sincere ignorance.”

With my daughter looking over my shoulder, I received this message on my phone. I pray for you.
“Conscientious stupidity or sincere ignorance.”
~Martin Luther King, Jr. pic.twitter.com/dOimv9sdN3

Mayor Bottoms also noted during a city council meeting on Thursday (Apr 23) that her 12-year-old son also received the same text message, prompting her to share the message online to raise awareness of the new form of racism.

“The reason I released that message is because I wanted across America to see what racism still looks like in 2020.”

When a city council member asked Bottoms on Thursday how she was handling the racist abuse, she said her family was fine but that it was disturbing that her son received the same message.

“That was more concerning to me than anything,” she said. Adding that she had a “very long conversation” with civil rights activist and former ambassador Andrew Young who reminded her that “white supremacy is a sickness.”

Despite the racist attacks, Bottoms affirms that she will not stop speaking up for and defending Atlantans.

“We are not cowards. Cowards don’t run for office,” she said.

Earlier this week following Georgia Gov. Brian Kemp’s controversial decision to start reopening parts of the state economy, Bottoms pushed back, saying she would consider legal options to keep Atlanta largely shut down because the city is “not out of the woods yet.”