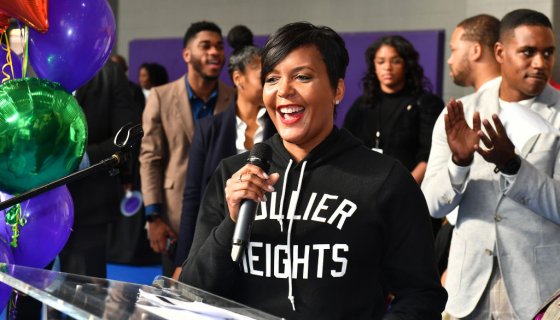 Much to the dismay of many across the U.S., Georgia Governor Brian Kemp (should’ve been ) announced this week that he was going to be lifting the states stay-at-home order and even though the Coronavirus continues to spread without any vaccines or even therapies available to those infected with the deadly virus.

One of the millions of people appalled by Kemp’s decision to put peoples lives at risk in the name of the almighty dollar is Atlanta Mayor Keisha Lance Bottoms who told TMZ she was “dumbfounded” that the Governor would consider opening up hair salons, tattoo parlors and massage parlors as if people would die without them.

“People are ready to get out but we have to be responsible and there’s not way you can socially distance when you’re cutting someone’s hair or if you’re giving them a massage.” That’s just science right there. Something that Republicans seem to have no interest in these days.

Still, while many of us would pay brick prices for a fresh haircut nowadays, the good mayor is imploring the citizens of the A to “stay home.” Sitting in her study decorated with family pictures and a Tupac figurine (that joint is dope), Bottoms asked everyone to “Exercise your common sense. It doesn’t matter what I say, it doesn’t matter what the governor says or even what the President of The United States says, the people who I am listening to are the infectious disease experts. I’m listening to the people who work in our hospitals saying ‘You’re killing us because you’re not staying at home.”

Funny enough even the Divider-In-Chief, Donald Trump said he disagreed with Kemp’s decision to open up non-essential businesses while also saying it was Kemp’s choice to do whatever he wanted.

Needless to say Donald Trump’s entire motivation to have states reopen their businesses has more to do with his re-election than with public health. Knowing that the only thing he had to run on this coming November was boasting about having the “best economy in history” (an obvious exaggeration), Trump knows he needs to salvage whatever’s left of the economy before we hit a depression that dwarfs that of the 1930’s.

Luckily for us we have elected officials like Mayor Bottoms and New York Governor Cuomo who prioritize human life over political ambition. Lets make sure we put more people in power who reflect their moral compass this coming November in both the senate and in the Oval Office. Our lives literally depend on it.