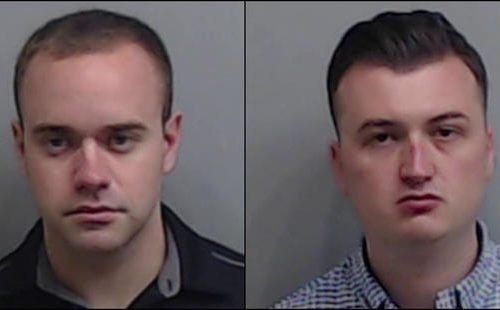 Garrett Rolfe and Devin Brosnan, the former Atlanta cops responsible for the murder of , have both turned themselves. The pair face several charges, with Rolfe facing the most serious charge of .

NPR reports that Rolfe and Brosnan, the officers who arrived on the scene of the Wendy’s parking lot where Brooks eventually lost his life, turned themselves in this past Thursday (June 18) after charges were publicly announced. The pair were booked at varying times at the Fulton County Jail.

A day prior, the Fulton County DA Paul Howard announced 11 charges against Rolfe, with the most serious charge levying a threat of capital punishment or life in prison without parole. Brosnan, who joined Rolfe as the arresting officer, was hit with four charges, which include aggravated assault and faces up to 20 years behind bars.

Rolfe was fired from his post while Brosnan was given administrative desk duty. As a result of the case and the charges, a so-called “blue flu” has spread with Atlanta police calling out sick in what appears to be a show of solidarity for Rolfe and Brosnan. In addition, the Georgia Sheriff’s Associaton called Howard’s charges “grandstanding.”

“District Attorney Paul Howard hastily conducted his own personal investigation before announcing he had secured warrants for the two officers,” Lumpkin County Sheriff Stacy Jarrard, the president of the Georgia Sheriffs’ Association, said in a press release. “Through this grandstanding vote-seeking tactic, Howard has trampled on the rights of Officer Garrett Rolfe and Officer Devin Brosnan and has further allowed this tragic incident to be more about his re-election than justice for the officers involved, the Atlanta Police Department and the citizens of our state.”

Brosnan and his attorney appeared on MSNBC and spoke with hosts Chuck Todd and Katy Tur, calling Brooks’ death a “total tragedy.”