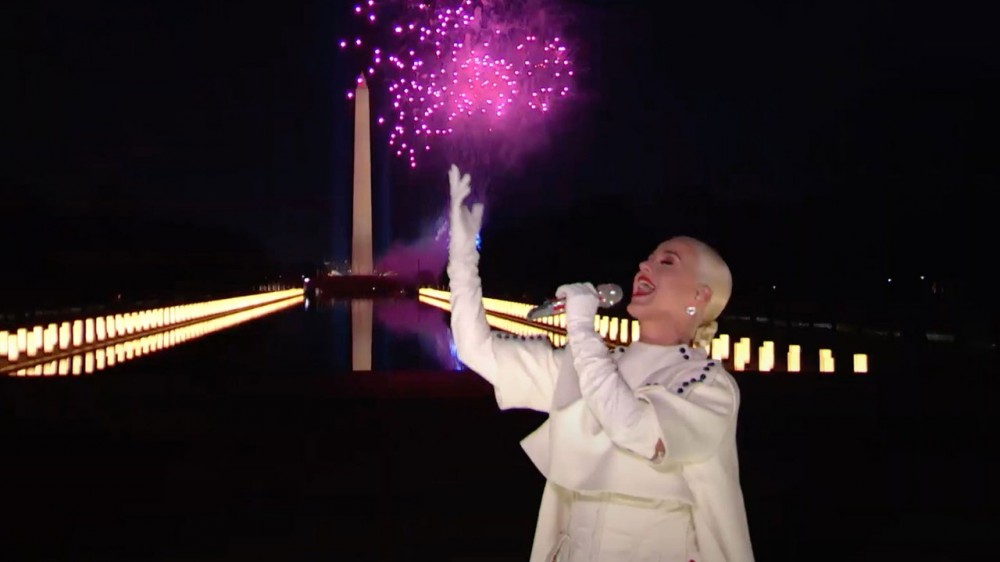 Katy Perry’s tastes may be eclectic, but when it comes time for a big event, she always goes for fashion that makes a statement. As the final performer at the Celebrating America concert in honor of President Joe Biden, Perry knew she had to pull out all the stops. Her minimalist separates from Thom Browne elevated the evening’s style quotient while showcasing a new side of her look. Browne’s all-white cashmere coat, satin corset, and floor-length skirt were cooler than the traditional gown, while still registering as elegant. As she performed her hit “Firework” with pyrotechnics illuminating the capitol, she looked exactly as a modern pop diva should.

In the past, Perry has shown her patriotism through pieces inspired by Americana—no musician has worn more flag dresses or Stars and Stripes skirts than she has, and yet 2021 called for a new verve. The look designed by Browne played with the all-American iconography Perry loves but in an understated way. Detailed with satin-covered blue buttons along the shirt’s sleeves and red versions at the corset's hem and skirt’s side seams, the outfit alluded to the nation’s colors without going into costume-y Uncle Sam territory.

This isn’t the first time Perry has sought out Browne for a milestone moment. At the launch party for her second fragrance, Killer Queen, back in 2013, she arrived at New York’s James Duke mansion in a gilded gown from Browne’s fall 2013 runway. Voluminous and covered in roses, the look offered a literal nod to the star’s foray into the world of fragrance and meshed with the camp wardrobe she once favored.

Fast forward nearly a decade, and Browne is still making Perry look her best, but in a way that feels elevated. Simple, regal, and unexpected, Perry’s inauguration night look highlighted her current perspective on style while paying homage to the evening's overarching theme.