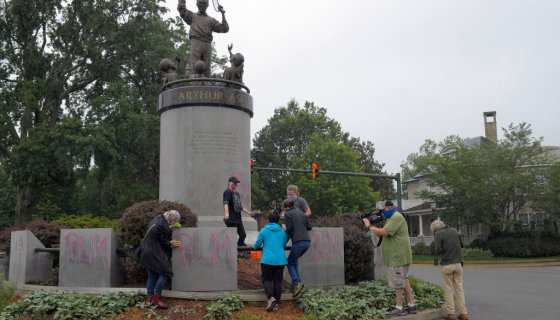 With protestors around the world , it was only a matter of time before racists answered accordingly and unfortunately they just did.

The Huffpost is reporting that a statue of legendary Black tennis player and Civil Rights activist Arthur Ashe was defaced this past Wednesday (June 17) in Richmond, Virginia where he grew up. According to the report a white man was caught spray painting “White Lives Matter” across the base of the statue and “WLM” across the pedestals underneath as well. When asked why he was violating the property with blatantly anti-Black Lives Matter rhetoric, the vandal of course denied it was because he was racist.

“Don’t all lives matter?” the man told a Richmond Times-Dispatch reporter observing him. “I’m not a racist. I just don’t agree with people desecrating property.”

Apparently “BLM” was spray painted on the statue before he added his own worthless two cents to it.

Ashe’s nephew weighed in on the matter.

“There are people who have an agenda,” David Harris Jr., Ashe’s nephew, told the Times-Dispatch. “Some of them are still settling on hate and discord because they see the system changing before them, and they’re lacking influence and control over it.”

Luckily there are more good people than not out in the world and volunteers cleaned off the racist graffiti left behind by the violator. Unfortunately racist white folk may feel the urge to continue this kind of nonsense so don’t be surprised if more statues of Black men and women receive similar treatment if not worst.

Police are investigating the incident but who knows what will come of it if anything.