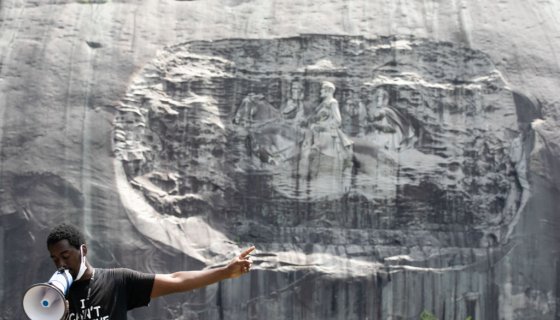 Confederate monuments are on following the tragic death of . Over the holiday weekend,’ Atlanta’s Stone Mountain reopened, and it didn’t get a warm reception.

Guests who really missed looking at the tribute to the losing side, aka the confederacy, were greeted by the beautiful site of ARMED Black protestors on Saturday (Jul.4). The group dressed in all black paramilitary gear while brandishing assault rifles other military-type weapons referred to themselves as the NFAC (Not F*cking Around Coalition), according to Newsweek.

One of the protestors described as one of the leaders of the march took a knee and spoke through a bull horn letting the white hood wearers that NFAC is not scared of them and are willing to bring the noise to their house.

Black Men are armed and ready at the birthday place of the KKK #StoneMountain pic.twitter.com/mVeSOZHwop

Stone Mountain is a known gathering hub for the Ku Klux Klan and other white supremacists groups. It features a giant stone carving of Confederate losers Jefferson Davis, Thomas Jonathan “Stonewall” Jackson, and Robert E. Lee. As statues and monuments have either been torn down or removed by local governments, there have been renewed calls for the monument’s removal following the death of George Floyd.

Black Twitter loved what they saw took place at Stone Mountain. You can see reactions to the NFAC marching into the KKK’s neck of the woods in the gallery below.

Black Men are armed and ready at the birthday place of the KKK #StoneMountain pic.twitter.com/mVeSOZHwop

This is the only marching I want to see going forward. 🖤✊🏿 https://t.co/Q9EWHoyk0Y

Do you notice when black men decide to express their Second Amendment rights no media covered it. pic.twitter.com/qoiZmO1vDB

y’all look at themmmm 🥺 they’re in Georgia at the KKK headquarters in Stone Mountain. this wtf i’m talkin bout !!!! pic.twitter.com/18RUsntECq

The largest armed Black crowd I’ve ever seen in my life just crossed the front of my house in Stone Mountain. Bigger than any Black Panther engagement I’ve ever encountered #July4th2020 pic.twitter.com/4iH5qx77Ee

BREAKING – An armed Not Fucking Around Coalition (NFAC) militia in Stone Mountain, Georgia has called out all rednecks to face them on the field of battle.pic.twitter.com/xUPkcT6uqL

The #NFAC (Not Fucking Around Coalition) Went To The Heart of The KKK at Stone Mountain, Georgia! The Revolution Won’t Be Televised But It’ll Dam Sure Be Posted! pic.twitter.com/lD0evHeXdj

Hundreds of Black protesters with guns marched at Stone Mountain near Atlanta today.

I'm waiting for the NRA to applaud this peaceful protest with firearms.

Protesters in Stone Mountain Park, Georgia, send a gentle reminder that open carry and stand your ground is not just for racists…pic.twitter.com/tXkTnfjdlQ

Rioters? What riot do you see? I've read multiple stories of what happened here (in Stone Mountain) and not a single one about any riot. Funny…when white folks do this it's "yay…2nd amendment". Black ppl do it and you make up stories to discredit them. Your racism is showing. https://t.co/WSOK9IvY8Z