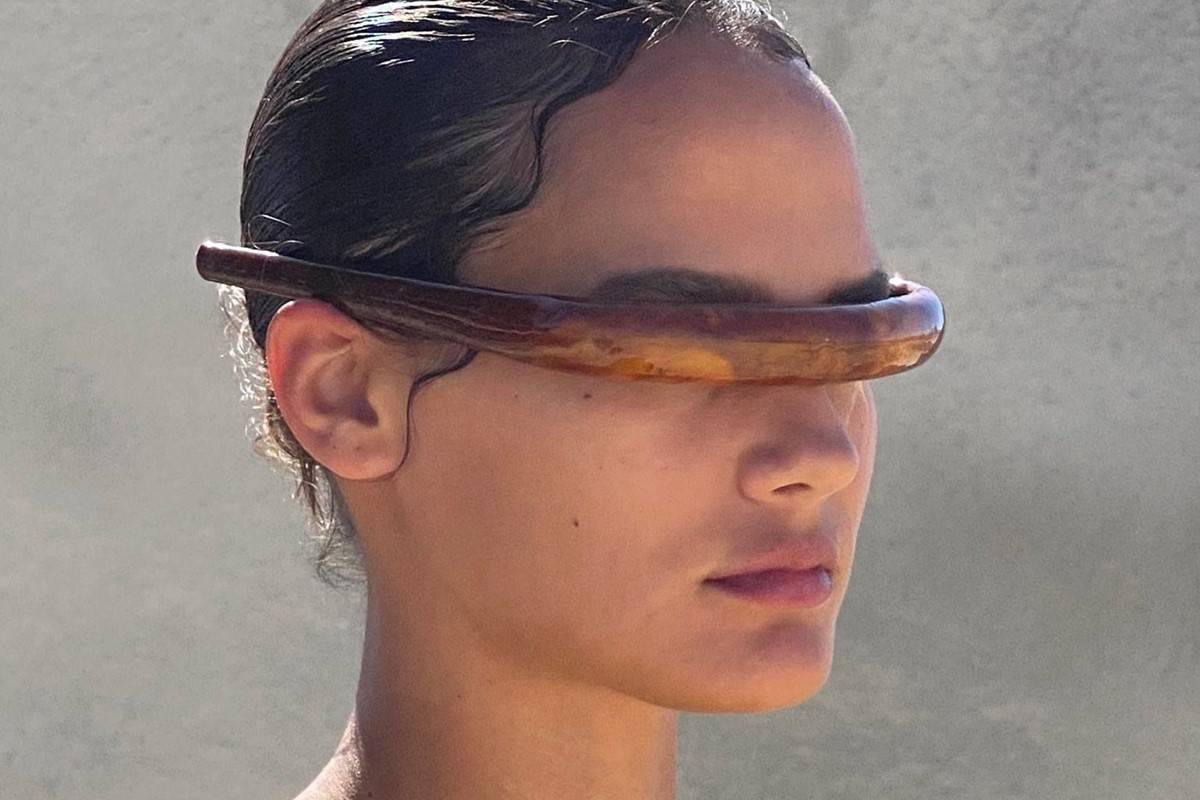 Back in 2018, tiny sunglasses took over fashion, with everyone from Bella and Gigi Hadid, Dua Lipa, and Kim, Kendall, Kylie, and Kourtney all trying the miniscule styles on for size. Two years on and the aesthetic is still going strong – only now, in the hands of Kanye West and Virgil Abloh, it’s evolving.

Debuting a slick, cyclops-esque style reminiscent of those worn by Geordi La Forge in classic episodes of Star Trek: The Next Generation at his SS21 Louis Vuitton show in Shanghai earlier this month, Abloh later explained he’d been inspired by the Afrofuturism of the 70s and 80s. Citing jazz legend Sun Ra as a big influence on the collection, the bold-hued zoot suits and Beanie Baby-adorned overcoats and mono-sunnies also called to mind George Clinton of Funkadelic – who (surprise!) was also known for wearing his own iterations of the subversive style.

Soon after, West revealed his own mono frame on Twitter, only this time they appeared to be made of wood – which begs the question, how tf are you meant to see out of them? Given the designer also dropped a whole series of Yeezy prototypes in quick succession, we’re guessing there’s still a bit of work to be done on the final pair, since it currently resembles a dislodged, admittedly q chic, alice band.

Also drawing inspo from classic sci-fi, in ‘Ye’s case this meant cult 1976 movie Logan’s Run, as proven when he posted yet another pair of what are thoooooose-esque boots alongside the carved ‘sunglasses’. In fact, it seems he’s been tapping into Logan’s Run for some time now, given his earlier Yeezy offerings, with their clean lines and muted palettes, along with his ill-fated Calabasas dome homes – that in no way felt extremely cult-y – were likely influenced by those seen in the film.

Abloh and West aren’t the only ones putting forward the retro-futuristic, cyborg-indebted style right now, though. Bubbling under at Balenciaga across the course of the last few seasons (in extremely space-age mirror finishes), the silhouette was also championed by John Galliano at Dior in the early 00s, and, as a quick scroll through TikTok will attest, Lord knows we’re not done scraping out every last fashion morsel that particular era has left.

The question that remains, however, is whether they’ll become a full-blown trend in the same way tiny sunglasses blew up – but tbh, if Kanye has anything to do with it, we wouldn’t be surprised. As a big force behind the diminutive shades taking over in the first place, after he sent wife Kim Kardashian West a memo basically forbidding her from wearing big frames, let’s not forget that Yeezus himself was the reason a whole generation of scene kids copped a pair of neon ‘shutter’ shades for their MySpace profile pics circa 2009 (cringe). Watch this space, we reckon.

Check out the gallery above.