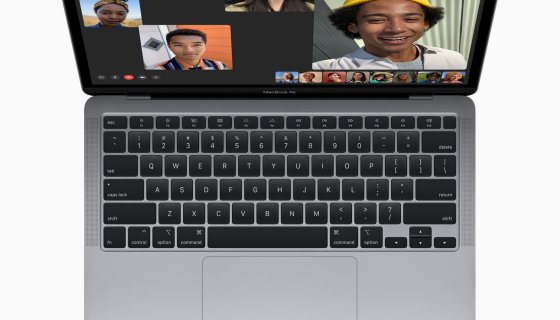 The isn’t stopping Apple from dropping these new devices and accessories. The brand already announced pair of earbuds, now we got a new MacBook Air and iPad Pro to marvel at.

Announced today (Mar.18), the new MacBook Air will give customers another option if they are looking to upgrade and don’t want to purchase the 16-inch MacBook Pro. With the  2020 MacBook Air, Apple promises faster performance from the previous model, twice the storage, a new “magic keyboard,” all at a fantastic lower price of $999, $899 for education customers.

The new keyboard on the 2020 MacBook Air moves on from the butterfly mechanism that customers complained about on previous models. Like the 16-inch Pro model, there are now inverted-T arrow keys, and it has the same 1mm of keyboard travel.

As far as performance, underneath the hood is the latest 10th-generation Intel Core processors up to 1.2GHz quad-core Core i7 with Turbo Boost speeds up to 3.8GHz. Apple boasts this will deliver up to two times faster performance compared to the previous model. The new MacBook Air will now deliver 80 percent improved graphics performance thanks to Intel Iris Plus Graphics.

As far as memory, the new MacBook Air gets a boost in that department now starting with 256GB, and it could be configured all the way up top 2TB. With its very affordable price and significant upgrades, the new Macbook Air could easily be the premier choice for Mac users once again. You can order the 2020 MacBook Air online starting today, and it will arrive in stores barring any delays next week.

Finally, Apple also pulled the lid off the new iPad Pro that now features a LIDAR Scanner and brings trackpad support to iPadOS. Billed as Apple’s “most advanced” iPad Pro thanks to it featuring the A12Z Bionic chip, Apple boasts it is now “faster and more powerful than most Windows PC laptops.” It comes in both an 11-inch and 12.9-inch model.

The new LIDAR scanner allows iPad Pro users to measure the distance to surrounding objects up to 5 meters away, works both indoors and outdoors, and operates at the photon level at nano-second speeds.

Apple also introduced a new magic keyboard with a floating design with smooth angle adjustment, a backlit keyboard, and a trackpad that easily works with iPadOS. It will cost $329 and $279 for students.

The new iPad Pro comes in Apple’s iconic space gray and silver finishes in either an 11-inch and 12.9-inch model. Starting configurations begin at 128GB and goes up to 256GB, 512GB and 1TB configurations.

This drop comes on heels of rumors of Apple dropping a plus-size model of its forthcoming .