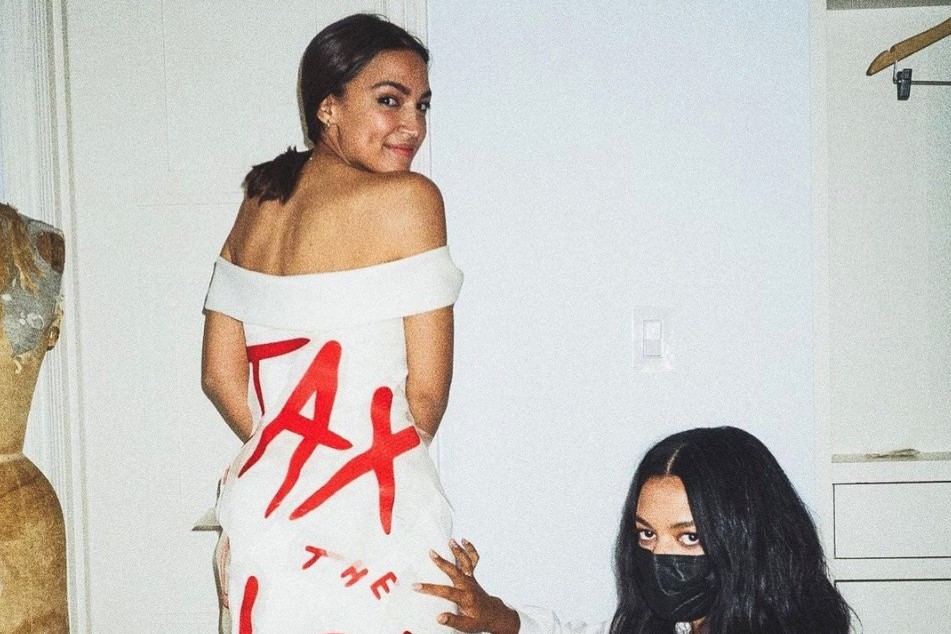 Infographic fashion had a moment on the red carpet last night, as Cara Delevingne also demanded to ‘peg the patriarchy’

With the devastation of the coronavirus turning the cracks of society’s inequalities into deep chasms, the past 18 months have been a politicising period of time to say the least. As a result, many have found themselves cycling through periods of online activism, familiarising themselves with its most popularised ideas and discourse. Be it – quite rightly – through the worldwide proliferation of BLM protests, the decimation of Palestine, or the climate crisis, a new generation have equipped themselves with all the songs and slogans of protest.

Perhaps, then, it was to be expected that guests at this year’s Met Gala would want to make some kind of “statement”. First out the gate was congresswoman Carolyn Maloney who wore a Suffragette-style dress with “equal rights for women” splashed across its purple and green wings – a kitsch, though still relevant, call for justice given the state of Texas’ near-total abortion ban. Then came Alexandria Ocasio-Cortez, dressed by Aurora James in a white tuxedo gown, with the words “tax the rich” emblazoned in bright red across her back. “We really started having a conversation about what it means to be a working class women of colour at the Met,” the congresswoman said while on the red carpet. “And we said we can’t just play along, but we need to break the fourth wall and challenge some of the institutions.”

Conservative pundits have predictably cried hypocrisy given that Ocasio-Cortez chose to take part in the 35k-a-ticket event – let alone make a statement against wealth hoarding under its extravagant canopy. It should be noted, however, that New York’s politicians attend the Met free of charge. And, the dress clearly resonated with the public. By Monday evening, there were more than 100,000 tweets devoted to the look. Whether the dress is a problematic proposition or not – after all, rich people should obviously be taxed – it’s also reminiscent of the way in which the internet has sanitised and flattened language of activism into lite catchphrases. See also: “eat the rich”. Slogans that gesture towards a political conscience while being wholly vapid.

Of course, AOC is well versed in these kinds of conversations, but it’s worth analysing how these moments might parlay into the mainstream – because it’s reminiscent of a not-so-distant time in fashion when leading designers would print extortionate t-shirts with hollow feminist statements. Yesterday evening, Cara Delevingne made the final branded proclamation of the night, wearing a corset stamped with “peg the patriarchy”. Pilfered, perhaps, from an Instagram account or pithy demonstration placard. Cringeworthy? Extremely. Wrong? Not entirely. Whatever it is though (and let’s call it infographic fashion) it’s only just beginning.