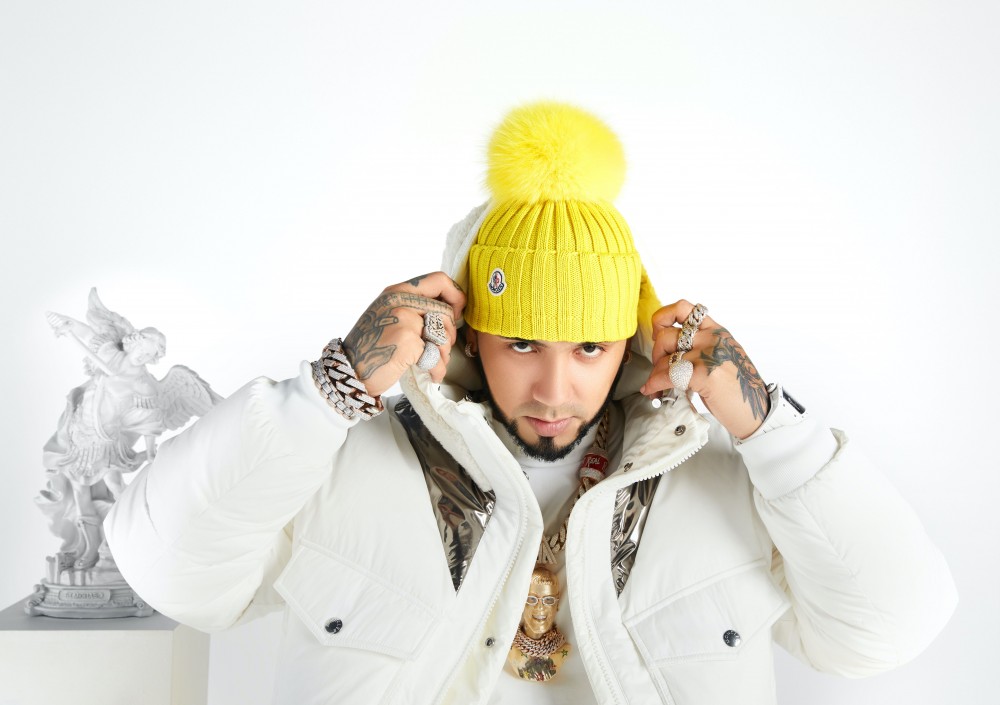 One muggy, Friday afternoon in May, a trio of luxury yachts could be seen off the coast of Miami’s Normandy Isles, blasting Latin trap for dozens of passengers. Trailed by a few more revelers on jet skis, and an incoming Miami P.D. boat soon to pull them over, each yacht was embellished with the name “Emmanuel.” It was the release day of Anuel AA’s new sophomore album of the same name — his birth name — and after a long spell in quarantine from COVID-19, the 27-year-old rapper, and the rest of Miami, was ready to party.

“Everybody does their release party in a club,” Anuel AA tells Rolling Stone over the phone, a week after his caper in Biscayne Bay. “And with coronavirus? I wouldn’t go to the club right now!”

Comprised of 22 songs, Emmanuel is a sonic feast that every bit as show-stopping, however indulgent, as his fleet of party boats. Split into side A and side B, the colossal double album includes some highlights from Anuel’s year-long procession of high-charting reggaeton singles, including 2019’s “Secreto” with his fiancée, Colombian pop-reggaeton star Karol G, and the 2019 homage to Shaggy, “China,” featuring all-stars Karol, Daddy Yankee, Ozuna and J Balvin. Even in the most crowded of featured tracks, Anuel’s hardy baritone cuts right through, leaving in his wake the smallest glint of pop sparkle.

Here's How to Demand Justice for Breonna Taylor

In Emmanuel, the Latin trap pioneer sharpens the skillset he first brandished in his platinum 2018 debut, Real Hasta la Muerte, or Real Until Death: which he recorded while serving the tail-end of his 30-month sentence in federal prison, on charges of unlawful possession of firearms. Anuel spins some more bad boy lore in his latest, going toe-to-toe with legendary rappers like Tego Calderón and Lil Wayne — plus his friendly rival, Bad Bunny. But Anuel graciously lets us in on his soft side in “No Llores Mujer,” a tender Spanish-language revision of Bob Marley’s “No Woman No Cry,” by enlisting the help of Blink-182 drummer Travis Barker, and one very special guest: Anuel’s father, Puerto Rican salsa producer José Gazmey.

Born Emmanuel Gazmey Santiago in Carolina, Puerto Rico, Anuel AA has undergone an astonishing reversal of fortunes throughout his life. As a kid, it once seemed like he had a promising music career in the bag, what with his father working as the Vice President of A&R at Sony Music in Puerto Rico. Yet his home life was turned upside down after the senior Gazmey lost his job, and by the age of 15, Anuel became a son of the streets. He balanced his new life of crime with a robust hip-hop career on the Internet, where his gangster-rap-inspired tracks, some far too offensive to quote, grabbed the attention of Rick Ross, who signed him to the Latin division of Maybach Music Group. Unwilling to let his career stall after his 2016 arrest, Anuel continued to record and release songs from prison; the release of Real Hasta la Muerte was synced with the day of his release from prison in July 2018. Nearly two years later, Anuel muses on the album he dropped under a different kind of lockdown, and the life he’s finally ready to lead as a free man.

I saw your Emmanuel yachts while I was walking to Miami Beach. How was your album release party?
It was cool, especially after quarantine. I just dropped the location on Instagram and everybody came through. Farruko came through, Nicky Jam came through, Kendo, almost every artist that collaborated with me on Emmanuel, and some fans. I’m trying to get a permit to do it again, how it was supposed to be — without the police trying to shut us down.

What was it like to spend time with Karol G for over two months in quarantine? You’re both such busy musicians, I can imagine you didn’t see each other much before the coronavirus forced everyone inside.
It’s been beautiful spending time with her. Not thank god for the coronavirus, but thank god we had two months together, off work and home from tour. I used to see Karol only two, maybe three days a week.

You guys wrote a song in quarantine — “Follow” — and recorded this adorable video. How did Karol talk you into wearing that Lilo and Stitch costume?
We was fighting! She was trying to make me wear that thing and I was like, “Hell no! There’s no way I’m wearing that!” But then she had me convinced. I was like “Well… what are they gonna say?” At the end of the day, everybody knows I’m crazy. I don’t have to be the bad guy all the time.

What was your process like when writing this album? This time you didn’t have to write it in prison!
I started to record these songs right after I came out of prison. I changed the date of the album release like, three times. We were doing all these tours, they were selling out around the world. That was just from one album, so I didn’t feel like it was the right time to release… the next one. We were about to drop it in April, but then coronavirus started spreading. But in that time, I made another song with Tego, and the song “Somo o No Somos” — two of the best songs on the album. I think being locked up actually boosted my creativity. I don’t gotta be stressed out, thinking about all the places I need to be at.

Where did you record it?
I recorded a few of the songs in my house, and in Hit Factory, a studio in Miami. But the song “Fútbol y Rumba” with Enrique Iglesias, we recorded in Spain. You know how fútbol is like, legendary over there? I was into those fútbol vibes. I was running late to a show in Spain, and I had this idea. I asked my producer, Ovy on the Drums, to send me a tropical, “Despacito” kind of beat. So I was in my hotel room with my manager, the assistants, my DJ. I asked them to start clapping along with that, like they do at a fútbol game. [sings] “Que viva la fiesta…” I sent that part to Enrique and he loved it.

Emmanuel shows more musical variety than Real Hasta La Muerte. You have Ovy doing more pop stuff, like “Fútbol y Rumba,” or the song “El Manual.” But your other producers, Chris Jeday and Gaby Music, keep that harder sound you’ve been known for.
When I made Real, I recorded it over the phone in prison. I did it in a week. I had no idea what it was going to sound like. I couldn’t even listen to the masters before it came out, I couldn’t listen to 90% of the beats. I recorded 21 songs in seven days. Thank god Real was successful, but I feel like Emmanuel will be even more successful. All my ideas, I could put them to work myself, on my own time. I had more control, and it shows.

After Real, a lot of people compared me to other artists but…  Even then, you couldn’t compare me to any other artist. They didn’t write 21 songs in seven days, in prison, and still hit Number One. I know I used to say a lot of crazy things in my songs, I didn’t care about what was commercial or what was gonna hit… But now, as I experiment, I still try to keep that essence. Even my romantic songs go a little hard.

Can I ask you what made you write a song as emotional as “¿Los Hombres No Lloran?” (“Men Don’t Cry?”) It is the most emotional track you’ve written yet!
I wrote [“¿Los Hombres No Lloran?”] around when I started dating Karol. I had just gotten out of prison, and I still had this street mentality. When Karol saw the lifestyle I had, she was like “Hell no, I ain’t gonna be with you. You’re gonna bring a lot of problems into my life.” She left for Colombia. She blocked me on Instagram, Whatsapp, everywhere. That’s when I recorded this song. I was feeling bad, because where I come from, from the projects? You don’t find nobody like Karol. She’s a good girl, she’s from a very good family in Colombia. I said, “I really gotta make some changes in my life. I’m gonna lose the things that really matter if I don’t.”

I think most people who come out of prison… they’re traumatized. Coming to the outside world again can be overwhelming.
It didn’t hit me that I was this famous Spanish rapper. My mind was still in prison. I had a lot of bad habits, I wasn’t taking care of my image or my attitude — and doors were closing in on me, in both my career and my relationship.

You wrote an Instagram post in memory of George Floyd, and in solidarity with the Black Lives Matter movement. How did you first understand that racism affected you?
I’ve been dealing with racism since I was a little kid! My dad’s super black, from Puerto Rico. Then my mom’s super white — she’s Puerto Rican too, but she grew up in Milwaukee. As a Latino in the U.S. I’ve seen how we are treated differently based on the color of our skin. I got black brothers that I love, I would give my life for them. In prison, the American guards would treat us both like shit. A lot of the Spanish and black guys would be in there for selling drugs or guns. But even if it was a white guy who raped a little kid… the American guards treated them like kings.

Seeing what happened to [George] Floyd, it brought back all these memories. If I killed someone like that, I would be locked up! Police have certain privileges. And if one of them kills somebody, and the rest of them don’t do anything about it? They’re guilty in the same way. The streets are like that too — people be judging you by the people you have around. If the police didn’t abuse their power, none of this would have happened. All this is gonna be over when they bring them to justice.

Anuel is more than just a bad boy in his new album, 'Emmanuel.'