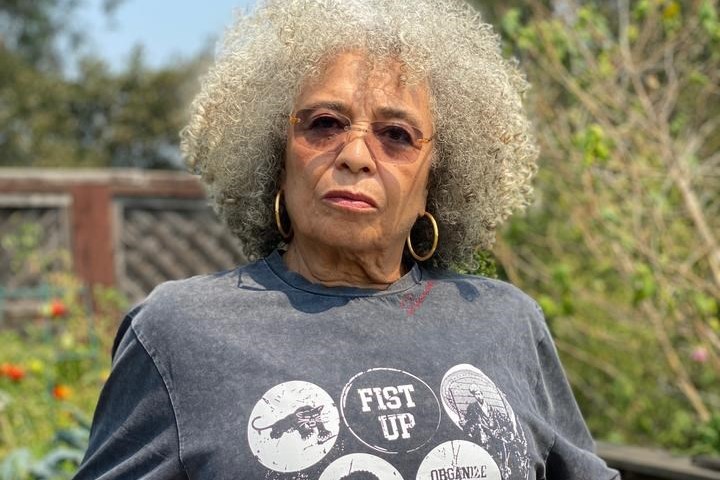 The revolutionary academic has launched a capsule with Los Angeles-based label Renowned LA, with proceeds going to groups fighting for prison reform

Angela Davis has added fashion designer to her long list of notable achievements, as she launches a new fashion line inspired by Black activists.

The revolutionary activist, academic, and author has collaborated with Los Angeles-based label Renowned LA on a capsule influenced by Black political leaders, as well as The Black Panther Party and its co-founder Huey P. Newton.

The collection includes a t-shirt and hoodie, both of which feature images of political leaders and logos, the word ‘dismantle’, and the phrase, ‘We not asking no more’. A portion of the proceeds will go to Underground Grit, a California-based organisation fighting for prison reform, and Dream Defenders, a group which aims to dismantle the police and prison systems. Davis is a board member of the latter.

“I’m extremely humbled that (Davis) even agreed to do something like this,” Renowned LA’s founder John Dean said in a statement. “I don’t think she’s done anything like this before when it comes to fashion.”

According to WWD, Dean managed the design and production of the capsule, while Davis chose which organisations would receive its proceeds. Dean honoured Black victims of police brutality in the t-shirt’s tag, which features names including George Floyd and Breonna Taylor, both of whom were murdered by law enforcement this year.

“I wanted to create something physical as a way to honour and keep their names alive,” he said. “I hate that it has to come at that expense. Someone had to die for us to do this.”

The collection is available to pre-order from now until December 18. You can find the t-shirt here and the hoodie here.