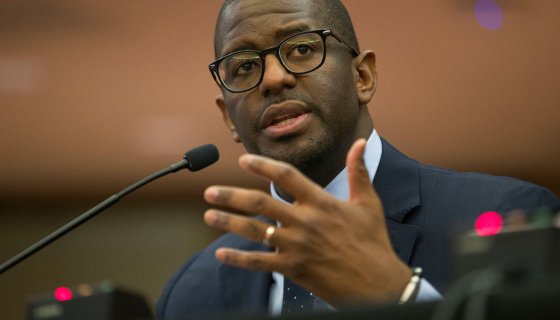 Andrew Gillum was one of the Democratic party’s rising stars, but ruined all of that. He is back to give us an update on his life.

Gillum surprised many when he just popped back up on the scene Monday (Jul.20) with a video giving followers and those genuinely concerned a “personal update” on his life. In the Instagram testimonial, the former gubernatorial candidate spoke on what he has been through since checking himself into rehab following a night that featured alcohol, crystal meth, and a male escort.

While not really spilling all of the tea on the night that saw some very ummmm rather disturbing photos of Gillum passed out, he did disclose his battle with alcoholism. He revealed that his defeat to Donald Trump-lite aka in the 2018 mid-term elections, hit him a lot harder than many knew and drove him into the arms of booze, and he suffered from depression.

“While my stuff had to be public and cause great embarrassment, lots of rumors, false, some true — the shame that I felt from all of that, from the harm that I had caused was tearing me up. I needed real help to try to unpack that.”

Gillum also disclosed that while he was in rehab, he began therapy and it’s there that he discovered that losing the election affected him greatly because he felt he “let so many people down.”

“The impact that losing the race for governor had on my life and on the way those impacts started to show up in every aspect of my life. It was a constant reminder of failure, a reminder that I had let so many people down.”

Aa for his marriage, Gillum called his wife R. Jai Gillum his “life partner” and added that “she knows everything that I am and everything that I am not. She chooses to love me, anyhow.” While his future remains uncertain, she reinforced that “this is the beginning and the best is yet to come.”

We are glad to hear that Gillum is doing well and if it’s one thing this country loves, its a redemption story. You can watch Gillum’s entire update video below.

I am thankful to so many of you who have wished me well during this especially challenging time. I wanted to provide a personal update on how I have been doing. Take good care of yourselves during this season and I will see you on the other side. Warmest, Andrew