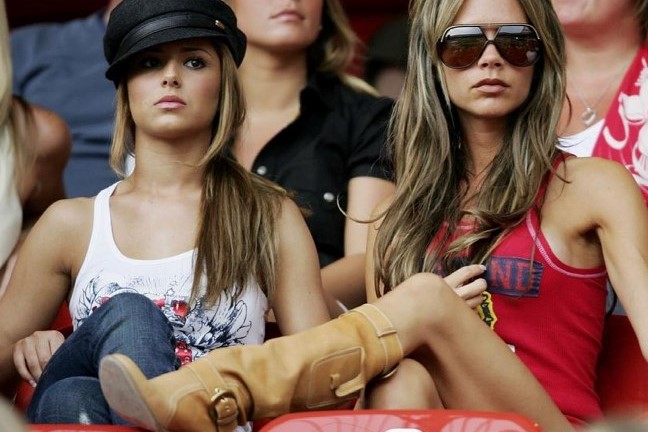 Victoria, Cheryl, Coleen, Alex, Abbey… this one’s for you

“Even a dog gets better treatment than this,” huffed a 2006 Victoria Beckham (allegedly) when the private jet that had been chartered to take the singer back from a Swedish football match had been delayed. With Cheryl, Coleen, and Abbey teetering behind, Posh, as she was still known, was off to Baden-Baden, the sleepy German resort town which played host to the WAGs and their families during the World Cup.

By day, the WAGs made international headlines with £57,000 shopping sprees and morning runs in full glam – Jimmy Choos click-clacking about the cobbled streets in well-heeled, military formation. By night, there were stories of entire magnums of champagne being enjoyed through straws at local nightclub Garibaldi. Not to mention the karaoke renditions of Gloria Gaynor, which Alex Gerrard was said to lead. It was at the height of tabloid culture and Baden-Baden was its sexist, snobby zenith. And although the WAGs were cruelly branded “hooligans with Visas” by the press, their impact on British culture was like a thunderclap – a 2009 survey by More magazine found that 60 per cent of 21-25 year old women wanted to become a WAG.

It’s where VB was snapped wearing heels in a swimming pool, Cheryl Cole in a coterie of “oi mister” baker boy caps, and Coleen, almost always piled with shopping bags like a designer Buckaroo, told congregated reporters she’d just picked up “a few bits and pieces.” Between all the chunky belts, caramel extensions, and saucer sized sunnies, the WAGs cultivated an aesthetic enshrouded in gossip, wealth, and mobility. A look which would then be reflected back by thousands of young British women, swapping out the Birkins for Paul’s Boutique.

There was, for a brief period of time, nothing more glam than the WAG aesthetic – all “jeans and a nice top” – its mass appeal owed in part to how easy it was to imitate. Think mini shorts, calf-high boots, and some kind of flouncy vest top. Low-rise denim, peep toe Louboutins, and a strappy cami. But always, always, with swamping sunglasses and a status bag dangling off the crook of an arm.

Unsurprisingly, Beckham and co’s dazzling antics were blamed for England’s poor performance in 2006. And since ex-England manager Fabio Capello effectively banned other halves from attending future football tournaments, the WAG’s dominance over culture has dwindled. Their influence still burns bright, however, with a new generation of Y2K-obsessed fashion fans taking over TikTok in looks heavily-indebted to era.

Now, with the Euros triggering memories of a golden era in Britain’s sartorial history, we take a deeper look at the remarkable fashion choices of our heritage 00 WAGs.