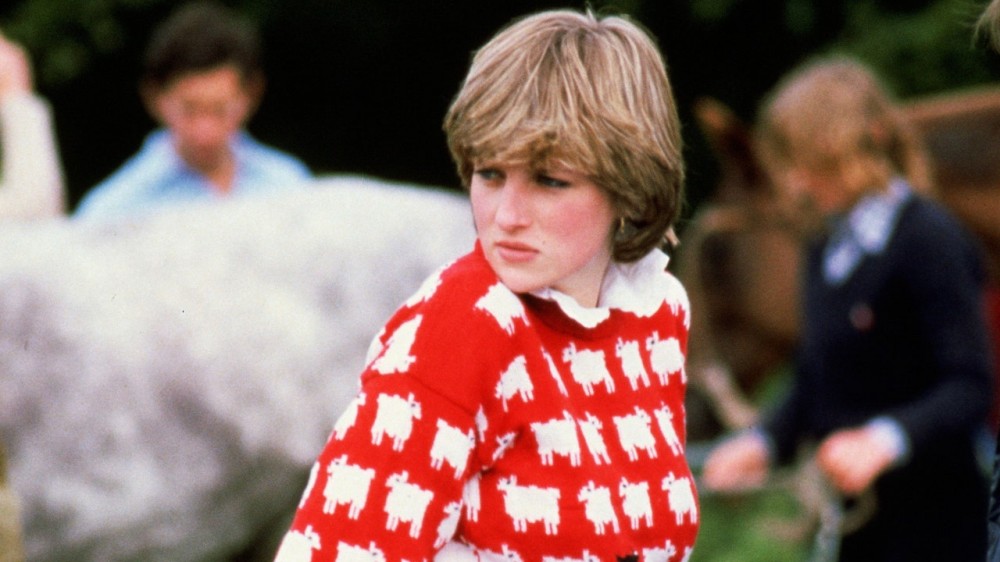 It used to be that the fashion legacy of Princess Diana was epitomized by her glamorous pieces: the “Travolta dress,” a velvet, midnight blue evening gown she wore while dancing with John Travolta. The “Revenge Dress,” the short, black mini she rocked while making her first post-divorce public appearance. Her beloved emerald and diamond choker that, in 1985, she fastened into a headpiece for a gala in Australia.

But with the rise of streetwear, off duty style, and well, a global pandemic that’s got us all in sweatpants for days on end, a new Diana fashion appreciation has arisen: for her loud-and-proud casual pullovers. In 2019, Hailey Bieber recreated Diana’s athleisure looks in a Paris Vogue photoshoot—college logos and all. And now, thanks to The Crown, her oft-outlandish sweaters are receiving a pop culture homage.

Yes: Princess Diana, arguably once the most photographed woman in the world, wore grandma knits like no one else. She’d make public appearances in a jumper adorned with a smattering of sheep. (A clothing artifact, by the way, that’s now part of the V&A’s permanent collection.) Then there was her grandma-style Fair Isle sweater—complete with a llama motif—which she wore while posing for pictures at Balmoral. A hot-pink pullover that said “I’m a Luxury,” which she donned while pushing William and Harry on a swing set. While cashmere and cardigans often make the average person look stiff and stuffy, Diana wore them with stylish, Sloane Ranger-esque panache. (It's no wonder that modern prep brand Rowing Blazers’s recent fall-winter collection is partly inspired by Diana's 1980 sweater looks.)

“I loved the jumpers from her early years,” Emma Corrin, the actor who plays Princess Diana, told Vogue. The Crown’s wardrobe department sourced them from all over: vintage shops, costume hire houses, and antique fairs. They also sourced 1980s-era fabrics from design house archives for their own recreations. Award-winning custom designer Amy Roberts explained to Vogue that in her studio, there’s a huge wall hung with old photographs of the royals—Roberts also finds inspiration in film, magazines, and fashion campaigns, but the pictorial journey is a great starting point.

While not every sweater Corrin wears is a real-life replica, The Crown does reprise some of her greatest knit-hits. The llama jumper does, in fact, make an appearance, much to the delight of the actor, who names it as one of her favorite costumes from this season. (“I’m obsessed with the llama,” Corrin says.) The sheep, too, make a split-second cameo on-screen. Other scenes capture her real-life wardrobe’s essence: during her courtship with Charles, paparazzi often captured Diana walking out of her apartment in a v-neck sweater. When a season four episode shows Corrin’s Diana struggling with the press, she wears a similar fashion.

Diana’s royal style was no means monolithic. (“She was ‘Shy Di,’ then ‘Dynasty Di’ in the ’80s, and her image as the powerful, sleek philanthropist in the ’90s is endlessly documented,” Vogue’s Sarah Mower wrote of her fashion evolution.) But her penchant for chunky, campy knits and pullovers stuck with her throughout it all. As the late Princess one proudly proclaimed, “I’m a free spirit.” It's a motto she wore right on her sleeves.