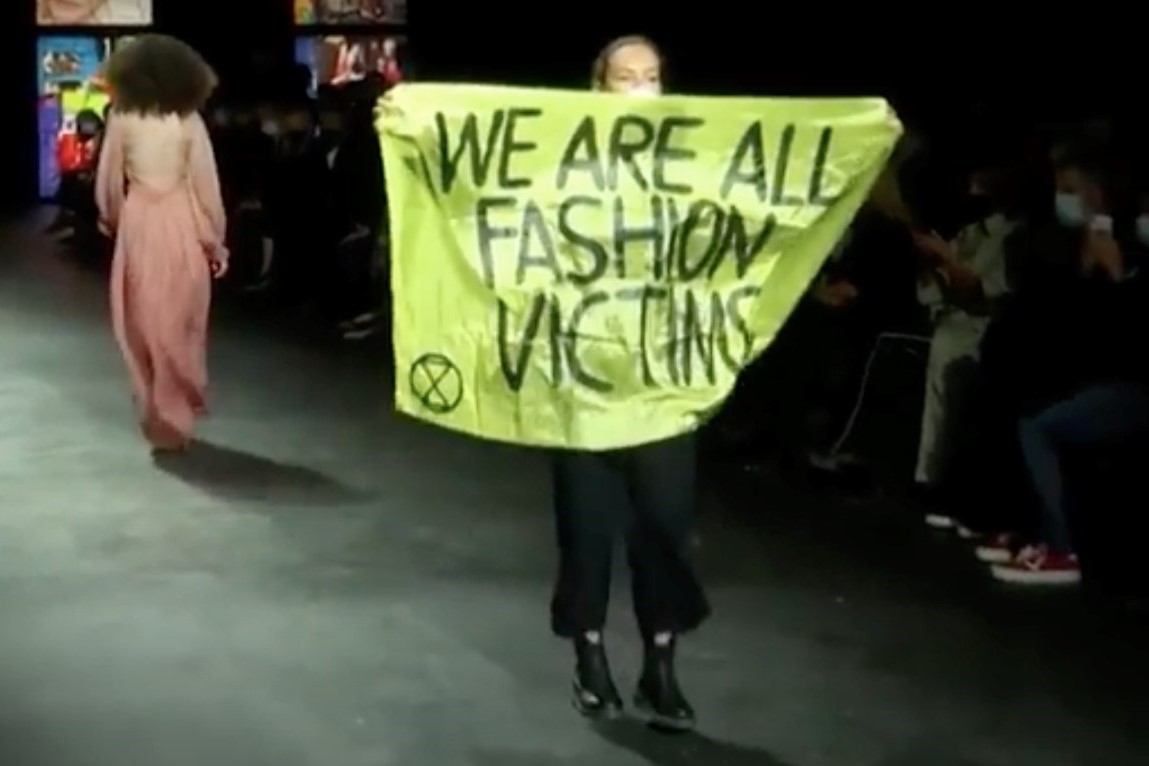 Where there’s fashion shows, there’s runway crashers. While previous appearances include PETA protesters, topless women, and an actual live cat (see: fashion’s most memorable catwalk crashers), the latest is an Extinction Rebellion protester who took to Dior’s spring 2021 catwalk in Paris with a sign that read, “We Are All Fashion Victims”.

Given that Dior’s creative director Maria Grazia Chiuri regularly uses the catwalk as a platform for activist messages, not everyone was sure whether the moment was planned or not. Last season, the runway backdrop included signs that said things like “Patriarchy = CO2” in neon lights.

But an official statement from Extinction Rebellion has confirmed the organisation’s role in the disruption, which is part of its Fashion Act Now campaign, calling on the fashion industry to address its culture of excess.

“I took this action to state that WE ARE ALL VICTIMS OF THE FASHION SYSTEM. While the world is suffering under a pandemic and a climate emergency, Dior persists in fueling this culture of excess and obsolescence, that is inflicting terrible environmental and social damage to the planet, people, and animals,” said the unnamed protester in a statement.

“Fashion Week is a week of shame; catwalks have no place in the climate emergency. The only solution at this stage of the climate crisis is to produce less. Our governments must impose limits on this destructive industry,” she added.

Last year‘s spring/summer show saw Dior partner with Coloco, a collective of botanists and urban landscapers, to create a Paris Fashion Week garden, an ongoing sustainability project. LVMH, the brand’s parent company, said it was on course to exceed its goal to cover 30 per cent of its energy needs from renewable sources by 2020 and also on track to cut its CO2 emissions by 25 per cent.

But Extinction Rebellion’s Sara Arnold said: “We need meaningful change to our global carbon footprint and the industry’s carbon footprint and we need to see an end to the loss in biodiversity. To be on track for keeping global heating to below 1.5C requires a 15 per cent reduction in carbon emissions this year onwards, meaning a tangible difference to the way the wealthiest people live. The luxury sector has much to answer for.”

Last year, Extinction Rebellion staged a funeral to mark the end of London fashion week, while this February, members of the XR youth had their own fashion week protest in New York.