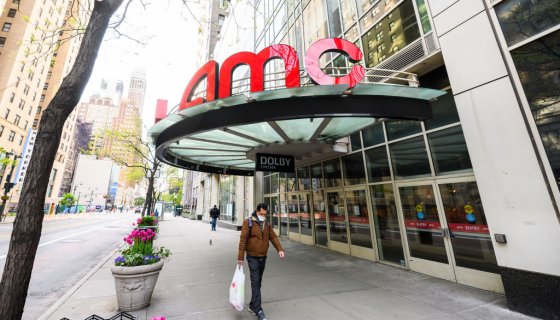 AMC is , but the news isn’t getting the reaction the company hoped it would.

Yesterday (Jun.18), AMC, the largest movie theater chain in the world, announced that it was going to reopen 450 of its 600 movie theaters on July 15th. Instead of the news being met with excitement, moviegoers are instead side-eyeing the decision. Despite announcing upon reopening that it will be following strict CDC guidelines, AMC CEO Adam Aaron is catching flack because he won’t force customers to wear a mask in regions where it’s not required.

In a statement Aaron disclosed:

The news was immediately met with criticism, and now the #BoyCottAMC is trending on Twitter with users calling out the theater chain for thinking protecting customers is a “political statement.”

Protecting people from a deadly virus is not a political statement.

The theaters still encourage those guests who foolishly think they are making a stand by not wearing a make to take the necessary steps to protect themselves from COVID-19 and to stop the spread. AMC also announced it will have $1 face masks, hand sanitizer, and disinfecting wipes readily available for theatergoers. As far as theater employees, Aaron added:

Unfortunately, that is not enough to give film fans a piece of mind to return to the movies to watch films like starring Denzel Washington’s son John David Washington and Disney’s live-action Mulan film.

The #BoycottAMC trend has seemed to work because has the movie theater chain says it now requires customers to wear masks during visits. It might be too late as some customers are still canceling their AMC Stubs A-List memberships.

You can peep all the well-deserved vitriol to AMC’s decision in the gallery below.

Too late. @AMCTheatres sent out the BS that masks were a "political" issue. Solely for money, it pushed BS that is now reinforcing the "I won't wear a mask because liberals " crowd.

I will not ever patronize a company that thinks its money is more important than our lives. https://t.co/FMVAXscEuW

Putting @AMCTheatres on blast… you love to see it! #BoycottAMC https://t.co/GWYSsjUc1B

Be a shame if the AMC corporate number got out there and people flooded their lines #BoycottAMC pic.twitter.com/jMeM7yBOZE

Cinemark and Regal watching amc take the heat for the face mask policy while having the same policy #BoycottAMC pic.twitter.com/8ggP96GMwy

You’ve GOT to be kidding. How f****** irresponsible.
Why is SAFETY a political issue for @adam_aron and @AMCTheatres?

Well, I was really on the fence about continuing my monthly AMC A-List membership and going back WITH a mask. #AMC, thanks for the clarity.😷#BoycottAMC pic.twitter.com/fMwY3E03Pb

This is where we are in America: Following basic public health advice is now a “political controversey.” https://t.co/yfPJuhyUM7

Been a long time customer, but cancelling my Stubs membership in 3…2…1 #boycottamc https://t.co/IEOnKFP31O