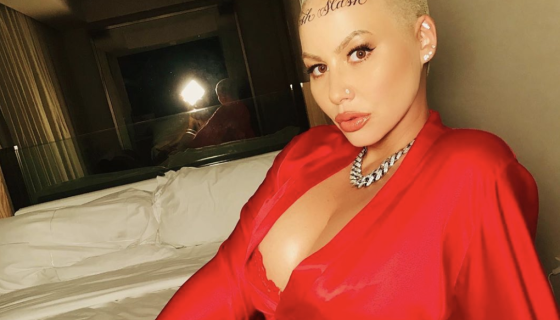 debuted her and it set the internet ablaze, now she has some choice words for the critics.

On Wednesday (Feb. 12) Amber Rose took to Instagram to address the critics and reveal her inspiration behind her new of her children’s names.

“For the people that are telling me I’m too pretty for a face tat are the same people that would tell me that I’m ‘too pretty’ even if They thought I was ugly and lie to me Lol Or they would just tell me I’m ugly,” Rose wrote. “So either way The moral of the story is do whatever the f*ck you want in life.”

Muva Rose also stopped by Fox Soul’s series One on One with to address her new tattoo before noting that the inspiration came from the death of basketball icon .

“You know, I gotta be honest,” Amber began. “I don’t want this to sound like, corny or anything, but after Kobe died it made me reflect on my life. I don’t people to be like, ‘Oh Kobe died so you went and got a tattoo?’ But, it was kinda like that because I thought about my dad and my dad had cancer when he was 40. He went through remission and he’s good, but he almost died. I’m 36. And I was like, I’ve been wanting this tattoo for a long time and I was like, you know what? Life is so short. Just do it. Just live your best life. With no regrets. Just do it.”

Amber Rose wasn’t the only one in the relationship that added some new ink, Rose’s boyfriend, record executive , also got one of his own forehead tattoo of Slash and Bash’s birthdates. The ink features a lightning bolt between the two dates, “10•10•19” and “2•21•13.”