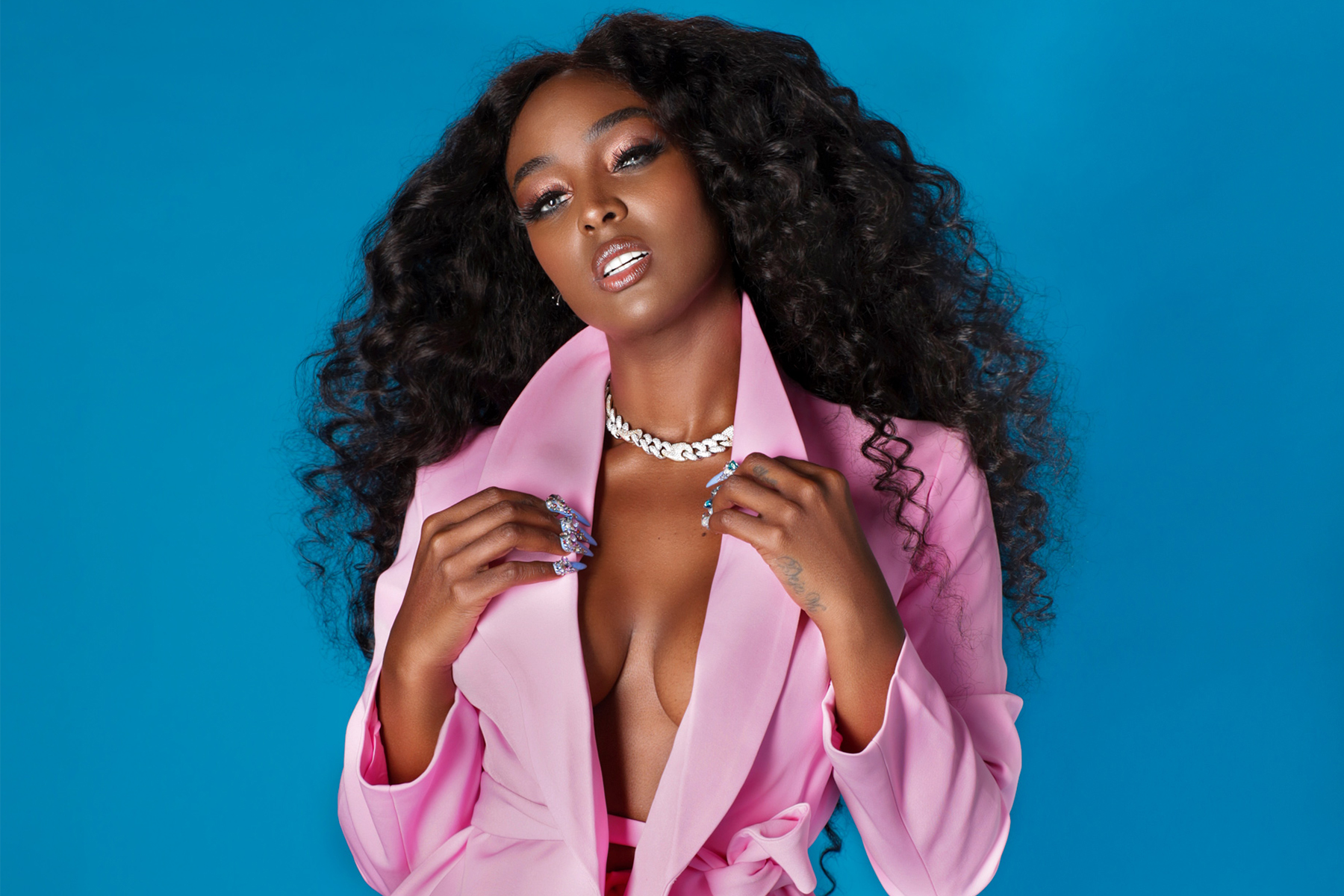 Amara La Negra has a magnetic quality that’s followed her from her days as a child performer on the famed Spanish-language variety show Sábado Gigante to VH1’s Love & Hip Hop: Miami, where she quickly became a breakout star. When she talks, people tend to listen — and she’s continually made it a point to use her voice to bring complex issues to the forefront, including anti-Blackness in the Latinx community, the pernicious colorism embedded in the entertainment industry, and body image pressures exacerbated because of social media. While the subject matter she tackles is often serious, she’s funny and off-the-cuff, something that’s drawn almost 2.5 million people to her Instagram account.

'All About the He Said, She Said…': Hear Our Podcast Debate on Limp Bizkit's Legacy

The Disappearance of Kristin Smart: What Happened and What's Next

Now, she’s found yet another platform to share her perspectives: She has a new podcast called Exactly Amara through iHeartMedia’s My Cultura network, an initiative aimed at elevating Latinx voices. Amara co-hosts the show with Stevey Newnez and dives into sex, body positivity, relationships, racism, and more every Thursday, all while sharing her own personal experiences.

Nuevo Culture caught up with Amara recently while she was visiting the Dominican Republic, where her family is from, and discussed the new podcast, what kind of representation she wants to see for Black Latinos, and what she’s planning next.

Congrats on Exactly Amara! How did the idea for this podcast come about?
Long story short, I definitely want to give a shoutout to [President and Chief Creative Officer of iHeartLatino] Enrique Santos — he was the one who always motivated me and encouraged me to put my personality on radio. This opportunity came about and he was the one who set it up and I was so grateful. It was basically about being exactly Amara, showing people who I am as a person, talking about my own personal experiences, and just being myself. He basically was like, “Well, you have a great following and everyone loves who you are, they love your personality, so why not try radio?” And this has been the best thing ever. This is something new for me and so far, so good. Everyone is loving Exactly Amara. This is my baby and I’m loving it and taking care of it, and I’m excited to see where it goes.

People have gotten to know you on Love & Hip Hop: Miami, as well as on Instagram and through your music. What side of you will people see on the podcast?
It’s definitely unfiltered, uncensored. It’s not PG-13; it’s slightly naughty. [Laughs.] I just wanted to have a safe space and judgement-free zone where we can talk about everything and anything, even if it may sound bad. I wanted to be in a space where I could just be myself and be honest and be transparent about things like money, generational growth, finances, finding who you are as a person, learning how to heal, obviously talking about the Latinx community, and showcasing who we are as people overall. Sex, relationships, everything. Times have changed so much and things have evolved so much. My generation, in every aspect, is very different, from the music that we hear, from the way we see marriage, from the way we see having children and families, to our independence as empowered women. I wanted a safe space where we could talk about all of these things.

On the first episode, we hear a lot about your upbringing and experiences in the industry, which included performing on Don Francisco’s Sábado Gigante as a kid. You also invite your mom to share her perspective. It sounds like the show is going to continue to be pretty intimate.
Yeah, for sure. It’s fun and… I want to bring in friends and family, like my mom, here and there because I think it’s great to hear their experiences and the way they see the world as well. The one big thing that I feel grateful for now that I have my own podcast is that I feel the Latinx community has been underrated for the longest time in the media, especially when it comes to podcasts, and My Cultura is really looking to change the content and represent the language and the way we hear podcasts. I also want to hear different perspectives, so I want to give a shoutout to all the Latinos that are in this new wave of My Cultura podcasts. We have Wilmer Valderrama, Rosario Dawson, Gloria Estefan, Eva Longoria, and a lot of others, so we’re really changing the game and bringing diversity to podcasts.

Since Love & Hip Hop: Miami, you’ve raised issues about the lack of representation for Black Latinos, and this is what you focus on in the second episode of the podcast. You share one story during the show about the salsa singer Celia Cruz and her role in a telenovela. For people who don’t know, can you share what happened there and what it says about how Black Latinos are treated in the community?
For those who might not know Celia Cruz, go to do your research. [Laughs.] She was the biggest sonera and salsera in history. She was Cuban, she was Black and beautiful and charismatic and humble and so many amazing things, I don’t even have the words to explain. I recall — and I was very young — how important she was, because she was one of the only artists who made it worldwide during some of the hardest times, when Black people in the Latino community weren’t seen in the most positive light, and she made it. So for us, it was like she made it, she represents us, she’s one of us, and she was a big pride and joy for all of us. She wanted to get into acting and she did a telenovela, which are soap operas that are very big in the Latinx community. In this novela, Celia Cruz played a chacha, a nana, a maid, and in this scene, the main character comes and slaps her in the face. It was just a humiliating moment for the Afro-Latino community, because we felt like out of all the roles in the world that she could have played, y’all finally gave her a break to be on a novela, but as a maid. And then when you do give it to her, she gets slapped around and humiliated on camera. She was acting, but we still took it heart. Very few of us get to be recognized for our work and for our music. So, to finally see her in that space and unfortunately for it to happen in that way, it was very hurtful for the Afro-Latino community.

What are you seeing in terms of Afro-Latino representation in the Latino community now? What do you want to see more of?
Love & Hip Hop: Miami gave me a great opportunity to be as open and vocal as possible about the Afro-Latino community. I continue to keep pushing toward opening doors and breaking barriers for other Latinos like myself. I think that as long as I continue to use my voice to inspire and motivate others to do the same, the conversation is going to continue. Every opportunity I have to let Latinos know I’m still here, I’m still working on making these changes — I think that’s the best I can do. The best I can do is to continue to use whatever platform given me to tell A&Rs, executive producers, anyone who is in power who has the possibility to make a difference, to do so, and I think that that’s important.

I think the best way to continue bringing awareness is to just keep talking about it and not letting things just slide, like the way it had before the movie In the Heights. You can’t just let things slide, you have to talk about it and be vocal about it until someone listens and something really does change. I’m praying and wishing to one day see a movie where there’s the right representation of Afro-Latinos — or a series — where you don’t have to pretend to have a different accent or pretend to be someone that you’re not. There’s a lot of changes that need to happen in order for me to say, “I really saw a big difference.” Right now, I feel that after the Black Lives Matter movement, people were talking about it, people were vocal about it, but…I don’t want to say it was a trendy moment, but I just feel like a lot of people have forgotten that the fight is still not over.

You’re always working on multiple projects at once. What else do you have in store?
I’m excited about the podcast. We’re going to have guests like [the plastic surgeon] Dr. Miami and a lot of other surprises that I don’t want to give away… The fourth season of Love & Hip Hop: Miami, is coming out soon [August 23rd], and I have new music coming. I’ve been in the Dominican Republic recording new music and exploring with sounds like dembow, so there’s a lot more for people to look out for.

New episodes of Exactly Amara are out every Thursday.