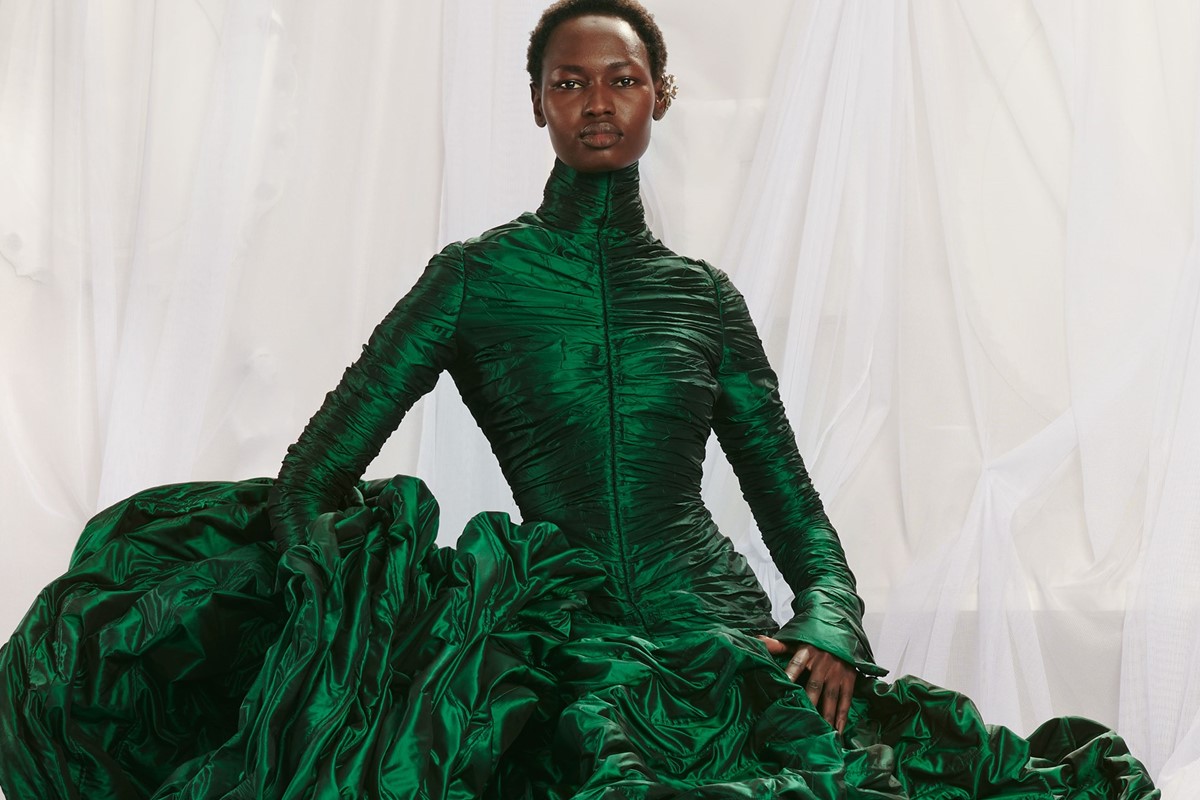 With his guest collection a huge highlight of the SS22 Haute Couture season, the Belgian designer speaks on his time at the helm of the house Jean Paul built

You’d never know Glenn Martens had committed to putting out three collections in the space of just a few weeks.

Wandering around the Jean Paul Gaultier atelier, where he’s taken up residence as this season’s guest couturier, the Belgian designer is cool, calm, and together – which is surprising given he’s set to unleash his first ever Haute Couture offering on the world less than 24 hours from when we speak. “It’s so different from ready-to-wear,” he explains, as he moves from room to room, past boards full of sketches and model comp cards, and people beavering away in the background. “We’re usually still running around like crazy at this point with that. But this collection is just about finished.”

Martens isn’t out of the woods just yet, though. When it comes to fashion’s highest form, some of the most drastic adjustments and crucial final touches are made in the minutes and seconds before they land on the catwalk, as hems are ripped, necklines yanked up, and crystals and beads added at breakneck speed. Call this brief interlude the eye of the storm, if you will. “Yeah, it could definitely be a very different story come tomorrow,” he adds, with a laugh.

Of the three collections he’s debuting across January and February 2022, he’s so far ticked Y/Project off his list, sending a mammoth collection down an equally mammoth runway in a fluorescent-lit DPD depot in the outskirts of Paris. Packed full of Marten-isms, including twisted denim, wildly off-kilter tailoring, and more than a few pairs of signature denim ‘janties’, it also offered us a first look at the fruits of his collaboration with Gaultier, which spilled out beyond the boundaries of his one-time turn at the helm of the house.

Mixed in amongst the quintessentially Y/Project offering came models in skin-tight tops and minis, muscle vests, and dramatic, flowing gowns bearing new interpretations of Gaultier’s legendary 1995 trompe-l’oeil pieces. Needless to say, the fashion crowd’s appetites were well and truly whet for the big couture moment that was to come – and what a moment it was.

With Gaultier’s riotous shows known for stretching to up to an hour, Martens was intent on stripping the runway show back to its essence. Instead of theatrics and high-profile models, elaborate sets and celebrities, there was a narrow catwalk lined with heavy black velvet drapes. Just the audience and the clothes. “We really want the collection to do the talking,” he explains. “There’s a time and place to go big, but we wanted to keep this very simple.” Drama might have been kept to a minimum when it came to the production, but by the time the lights dipped and the disparate electronic beats of the soundtrack kicked in, it was clear the designer had cranked his vision for the house all the way up.

Kicking things off were a series of wiggle dresses, first in monochrome and soon in furious scarlet. Also bearing trippy, trompe l’oeil-esque stripes, each of the piece’s undulated lines had been given the Martens treatment through articulated hip panels – that signature deep V pointing towards the mons pubis immediately recognisable to fans of his work. Gaultier’s famous Marinières also got a look in, as Martens reimagined his iconic Breton stripes via knitted two-pieces studded with faux coral that jutted from the models’ bodies and felt simultaneously tactile and untouchable.

A succession of tulle looks, bearing crystals arranged so they appeared like glittering ribcages, made way for classic Gaultier hourglass corsetry, with Martens going wild with one ivory ribboned bustier. Snaking endlessly around the body, the corset was matched – or rather, clashed – with a pair of bleach-blasted, wide-leg jeans. (Come on. You didn’t think Martens was going to skimp on the denim, did you?) Elsewhere, a similarly snatched black velvet gown was paired with carved ivory earrings, which called to mind the incredible Kama Sutra jewellery, in which sculpted figures were contorted into all manner of sex positions, that appeared as part of Y/Project’s AW19 collection.

The pièce de résistance(s), however, came at the close of the show. Bouncing down the runway came two outlandish gowns which saw Martens really let loose. With one crafted from deep sapphire duchesse silk, its tight, sculpted corset exploded at the hips, giving way to an atomic explosion of ruffles that cascaded to the ground. Its counterpart, a rich emerald style, enshrouded the model wearing it completely, her head just peeking out as she brushed audiences knees with the enormous confection as she passed. The whole thing was extraordinary, a monumental moment not just for Martens, but for the house of Gaultier, too.

“We had lunch right at the start so we could get to know each other a bit, but he (Jean Paul Gaultier) really left us alone to do what we wanted. It made the whole process a lot easier, I think, but obviously it’s nerve-wracking wondering what he’ll make of it all” – Glenn Martens

Perhaps surprisingly, given the notoriously monstrous egos of some fashion designers, the show marked the first time JPG himself saw the collection, after he gave Martens free range to do his own thing. “We had lunch right at the start so we could get to know each other a bit, but he really left us alone to do what we wanted,” explains Martens. “It made the whole process a lot easier, I think, but obviously it’s nerve-wracking wondering what he’ll make of it all.” He needn’t have worried. Along with the rest of those with their eyes on the show, Gaultier seemed to love it – clapping enthusiastically and smiling throughout. And with Martens working for fashion’s OG enfant terrible fresh out of school, it felt like a special, full circle moment.

Having ticked two out of three shows off his to-do list, Martens has only Diesel still to get out of the way at next month’s AW22 womenswear shows. So too will come another switch-around at Gaultier, with the Belgian designer’s one-time successor yet to be announced. But given the rip-roaring responses Martens’ collection has racked up among the fashion crowd and beyond, while we love the idea of unique reinterpretations, season after season… Are you sure you two don’t want to link up just one more time?