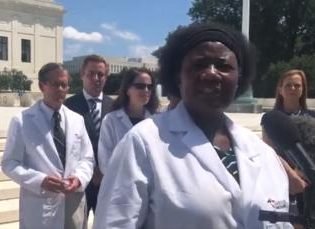 Dr. Stella Gwandiku-Ambe Immanuel, a Houston doctor by way of Cameroon, mixes junk science with her unwavering faith but is something of a laughingstock after her wild claims of “demon sperm” and “alien DNA” online. Introduced as a voicebox for as an expert on concerns, Dr. Immanuel has gone viral for a wacko video that has many wondering how many cereal box tops did she send in to obtain a medical degree.

In an unhinged press conference this past Monday not unlike along the lines of the racist Swindler-In-Chief, Dr. Immanuel shared a passionate sermon of unproven facts and hyperbolic statements that would make the most hardened of MAGA nutballs salivate. Spewing fact after incorrect fact, Immanuel’s weird rant in the name of public health was, of course, shared by Trump his favored vehicle of Twitter.

“Nobody needs to get sick. This virus has a cure, it is called hydroxychloroquine,” Immanuel said with passion and vigor from the steps of the U.S. Supreme Court, not using anything fact-based or driven to prove her off-center points.

Amazingly, Immanuel is an actual licensed physician, having attended medical school at the University of Calabar in Nigeria and completing her pediatric residency in New York in the early 1990s. These days, Immaneul practices at the Rehoboth Medical Center, which she is also listed as an owner. Immanuel is also a pastor and founder of Fire Power Ministries, where she shares some of the zaniest “fire and brimstone” theories known to man.

A supporter of Trump, Immanuel has condemned the LGBTQ community and uses phrases such as “homoual terrorism” to hammer down her stance. She has videos of her discussing “alien DNA” and half-human, half-reptilian beings running the world.

She also has spoken of “astral ” and evil beings spreading “demon sperm,” which also suggests that having dreams of with said demons and “spirit husbands” and “spirit wives” will lead to STDs, miscarriages, infertility and more. If that wasn’t enough, she’s heavy into the Illuminati talk, which means she’d be right at home screaming on folks from a street corner.

It appears that those who still believe COVID-19 is nothing but a little tickle in the throat besides growing numbers and a death toll over 150,000 and rising are parading her ideas around. However, YouTube, Facebook, and Twitter have all taken down her videos for spreading false information about the novel coronavirus per a renewed initiative to keep the public abreast of the truth.

We’ve got reactions and such to Dr. Immanuel’s rant below.

Oh and get a load of this doozy right below.

So Tucker Carlson said the Daily Beast “attacked” Stella Immanuel for the crime of questioning Fauci, wrongly implying it invented the stuff about her and witchcraft.

Meanwhile, Immanuel herself approved of the story, including the witchcraft stuff. pic.twitter.com/VFzAbj4E0f

Think about this, Texas gave this woman a medical license. Nothing she can say is more outrageous than this fact. https://t.co/RX07v2s49v

Biden tells @WeAreUnidosUS that to reopen schools, Trump needs to "stop tweeting and start doing something about it, damn it." He adds that Trump should "stop talking about this crazy woman he talked about last night, who's an absolute disgrace," referring to Dr. Stella Immanuel.

.@IngrahamAngle How about a bit of a test. Will you use your platform to denounce “Dr.” Stella Immanuel who Trump retweeted as an expert on Covid. She has warned women about with demons and the medical danger of “Alien DNA”. Will you denounce Trump for tweeting this crap?

I’ll make a prediction 🔮
that trump will replace Dr. Fauci with Dr. Stella Immanuel bacause she believes hydroxychloroquine is a 'cure' for coronavirus & is a
leading expert on demon .

The virality of Dr. Stella Immanuel’s video is yet another example of the inaminate plague of confirmation bias that hurts so many of us. We must resist the appeal of emotion and always conduct due diligence.

I went to Dr. #StellaImmanuel 's office and all I got was demons in my vagina… pic.twitter.com/4fJmhwe4W1

I'm starting an office pool on what date the orange filth pig will appoint "Doctor" #StellaImmanuel as the next Surgeon General. If not that, maybe she can be the showrunner on the reboot of the 80's TV show "V" (Google it!) pic.twitter.com/Vc3YiWjLmh

Trump..on his way to Texas. Consulting with Dr Stella Immanuel of Houston who has cure for coronavirus.. pic.twitter.com/ZUeYdOjAu6

WOO HOO! We got ourselves a new flavor at Frank And Beans Kansas City Barbeque! So come on down! We'll set your nether regions on fire with new DEMON SEMEN Hot Sauce, inspired by the famed 'Dr.' Stella Immanuel! Try our new SMOKED HOT HOOHAH Sammich! Just $49.95! pic.twitter.com/dlrIoGSI9Q