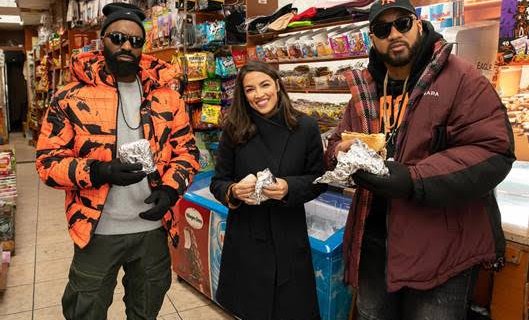 It is safe to assume that Vice Network is regretting not giving the bag. The duo is clearly taking their interview game to the next level.

The Bronx media personalities took it back to their old or maybe current stomping grounds in the Boogie Down. They are joined by none other than , the politician and activist who serves as the U.S. Representative for New York’s 14th congressional district. Commonly known as AOC she is also from the Bronx and has built a reputation for gather her political associates up in stunning fashion.

During her recent tour with the boys the trio explored the Bronx where she sounded off on pop culture, politics, sports and more. They hit up the Parkchester section to start their day with signature bacon, egg and cheese sandwich paired with a coffee. All three relish in their breakfast on the go as Alex reminisces on her grind to get elected. “When I was running the first time I would put up like posters in all the bodegas then I put them up at other stores. But the people I was running against would come and tear the posters down” she remembered. Cortez in turned served the store owners with postcards that they would stuff into each patron’s brown paper bags.

She also revisits her roots as a bartender where she mixed up drinks margaritas and a Hennessy infused Shirley Temple. Needless to say they caught all a vibe as she discussed her day to day fight will trying to represent the under served. You can watch the segment below.