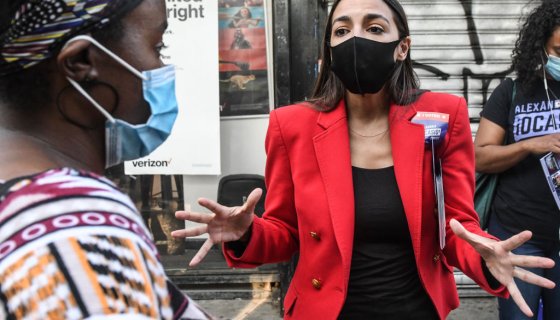 Ever since unseating the 10-term Democratic Caucus Chair Joe Crowley in an unforeseen upset during the 2018 midterm election primaries, has endured a hateful smear campaign from her Republican colleagues fueled by their fear that she could inspire more minorities to run for office and push a liberal agenda that would benefit the have-nots for decades to come while holding the haves accountable.

Still, Republican representative Ted Yoho decided to call her out her name earlier this week after what some say was a spirited exchange over police reform and called her a “f*cking bitch” on the steps of Capitol Hill after calling her “dangerous.” A woman who wants to fight global warming, calls for health insurance for the poor and wants police reform would be considered dangerous by someone like Yoho.

Reports say that AOC was ready to let the slander slide and get on with her life, but after Yoho took to the House floor and gave a non-apologetic apology for his actions and suggested his being married with daughters absolved him of being a ist, Ocasio-Cortez decided to put him on full blast and ethered him on the congressional record.

I walked back out and there were reporters in the front of the Capitol, and in front of reporters Representative Yoho called me, and I quote, a “fucking bitch” — fucking, bitch. These are the words Representative Yoho levied against a congresswoman. A congresswoman that not only represents New York’s 14th District but every congresswoman in this country because all of us have had to deal with this in some form, some way, some shape at some point in our lives.

And I want to be clear that Representative Yoho’s comments were not deeply hurtful or piercing to me.

And if y’all thought she was going to let the married father of two use his family life as a shield for his disgusting behavior, you’re sadly mistaken.

Mr. Yoho mentioned that he has a wife and two daughters. I am two years younger than Mr. Yoho’s youngest daughter. I am someone’s daughter too. My father, thankfully, is not alive to see how Mr. Yoho treated his daughter. My mother got to see Mr. Yoho’s disrespect on the floor of this house towards me on television, and I am here because I have to show my parents that I am their daughter and that they did not raise me to accept abuse from men.

Now, what I am here to say is that this harm that Mr. Yoho levied, it tried to levy against me, was not just an incident directed at me, but when you do that to any woman, what Mr. Yoho did was give permission to other men to do that to his daughters. He — in using that language, in front of the press, he gave permission to use that language against his wife, his daughters, women in his community, and I am here to stand up to say that is not acceptable.

And this is an example of why Republicans and far-right conservatives fear minority women with a spine and moral fiber becoming members of congress and the senate. AOC carved her initials on Yoho’s congressional legacy by putting his toxic masculinity on blast and we’re all here for it. Monster love and props for her bravery and G’d up demeanor.

In a recent interview with CNN, the congresswoman from the Bronx revealed new details about her conversation with Yoho before he decided to now infamously call her a “f*cking b*tch.”

“Do you really believe that people are shooting and killing each other because they’re hungry? You know, You’re unbelievable. You’re disgusting,” Yoho said, according to Ocasio-Cortez, saying the Florida conservative was wagging his finger at her.
Ocasio-Cortez then said she “tried to calm him down, but he wouldn’t.”
“And then I just told him he was being rude and he got even more angry, when I called him rude,” she said.
Williams, meantime, was first watching Yoho and then Williams “literally started hollering about throwing urine,” Ocasio-Cortez said Friday.
“He started talking about throwing urine,” she said. “I don’t know what he was talking about. I think he was maybe talking about an incident at some protest somewhere that I don’t know about. But he started talking about throwing urine and at that point, I was so bewildered. I was like, these folks are out of their minds.”
And Republicans accuse Liberal democrats of being batsh*t crazy for wanting universal healthcare, equality for all and other basic rights.

Peep her entire speech below and let us know your thoughts on the matter.