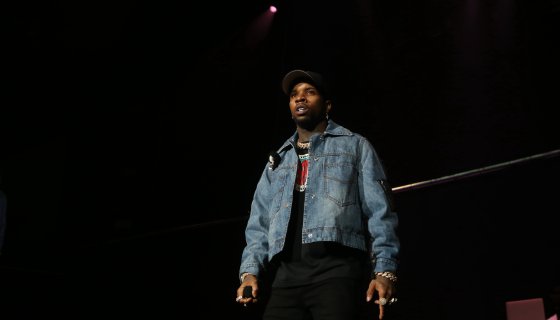 For every day that Tory Lanez remains silent in the wake of the that left Megan Thee Stallion injured, speculation builds that he had something to do with it. With Monday (July 27) being the rapper and singer’s 27th birthday, fans on Twitter are actually asking for the fade instead of well wishes on another year.

Lanez has been oddly silent since the shooting, this after collecting a huge bag from YouTube for his popular Quarantine Radio series that first aired on Instagram. The rumors surrounding the shooting after Lanez and Megan partied with Kylie Jenner have been growing in stature since, and Lanez is looking very funny in the light while Megan has been vocal about the trauma she’s suffered.

A persistent bit of chatter has been the idea that for hugging up with Jenner and was ready to leave, causing Lanez to fly off into a gun-wielding rage. As a citizen of Canada, it isn’t known if Lanez was legally sanctioned to carry a firearm in the United States.

Charges haven’t been made in the case and there is a reported ongoing investigation of the matter. Meanwhile, on Twitter, Tory Lanez and his refurbished hairline are catching all kinds of slander and we’ve got the reactions below.

Megan confirmed that both of her feet had to get surgery and addressed the false claim about “sources” saying that she put her hands on Tory Lanez pic.twitter.com/TVs58Q41Qt

I’m screaming. it’s Tory Lanez birthday today and all we wanna do is beat his ass 💀

@ Tory lanez, watch your back pic.twitter.com/FcDVHs9GAK

Yo Tory Lanez is really living what he raps. I forgot he said this shit pic.twitter.com/VXxuxtvnpM

The rise and fall of Tory Lanez, in one pandemic lockdown

Meg got shot in both of her feet ?? Yeah Tory Lanez is done out here.

AND THE FIRST PERSON IMA GO FOR IS THAT MIDGET TORY LANEZ pic.twitter.com/eqNKPfZrca

I mean… I been said Tory Lanez a fuck nigga.
This is just him digivolving to a Super Fuck Nigga.

me and my homies hate Tory Lanez

Tory Lanez such a itty bitty BITCH g. Lil niggas be BITCHES. They ass never been big so they forever think somebody tryna lil boy them. I really hate lil niggas for that very reason they lil ass too volatile like what the fuck.

Meg said she was shot in BOOTH of her feet. I hope Tory Lanez never knows peace pic.twitter.com/O7xS6VMIDL

I don’t support deportation cause it impacts black and brown people the most, but lord send Tory Lanez back to Canada!!!pic.twitter.com/j7VVdCZ2Ni