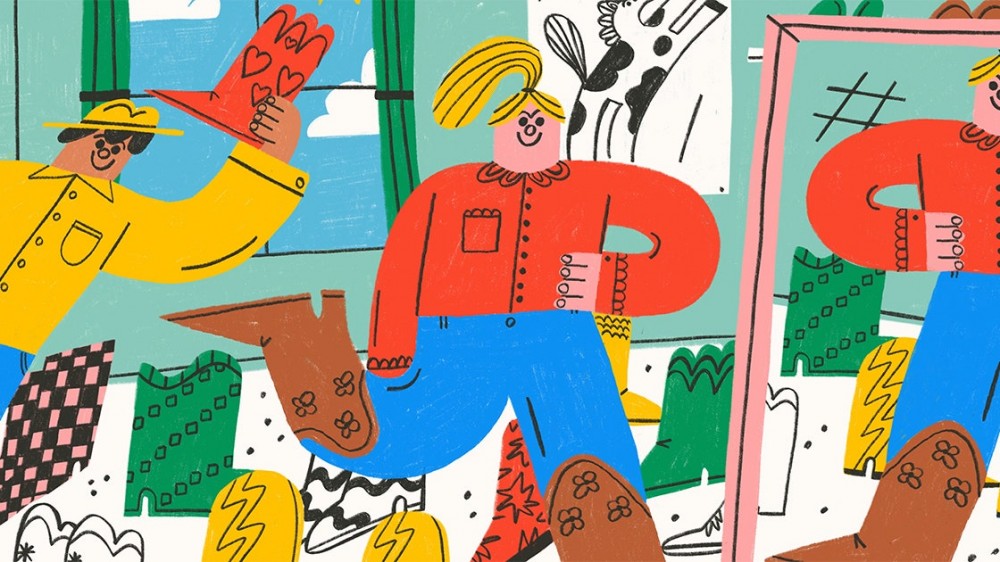 My first encounter with “American fashion” happened in Bangkok,. My parents—one of whom worked for a multinational company—my two older brothers, and I lived there from 2000 to 2002, from when I was four until I was six. We attended a British international school, and our classmates hailed from Australia, the Philippines, India, China, and Japan. The school had big, grand ceremonies and celebrations. We set flower-adorned banana leaf rafts on the river for Loi Krathong, Santa came in on an elephant, and once a year, the students dressed up for International Day in clothes that represented where they were from.

The school gathered in the oppressively hot and humid outdoor gym to watch clog dancing demonstrations and Khon masked pantomimes, listen to bagpipes, and walk in a parade of nations. In one photo from International Day, I’m standing with some friends who are wearing metallic chut Thai, complete with gold belts and sparkling jewels. I’m in a red polo shirt with a white collar, an embroidered American flag on the right pocket. “I don’t think you were very thrilled with the polo shirt,” my mother says now when I ask her about the outfit.

We moved from Bangkok to Surrey, England, and then to Dallas, where my parents were originally from, and where I would spend my preteen and teenage years. When I got off the plane from London at DFW airport, I saw a man in a 10-gallon cowboy hat and remember thinking, Oh, so they do wear those here. Texans aren’t casual about their love of Texas, and it often comes through in our clothes. It wasn’t uncommon for my teammates on the cross-country team to show up to practice in Texas flag running shorts or for guys in my grade to wear cowboy boots to school. I’m pretty sure Texas has a nice, appealing shape, but that may just be because I’ve become so accustomed to seeing it on tattoos, key rings, canvas totes, and my own turquoise, monogrammed laptop decal from college.

Dallas has a reputation within Texas for being snobbish, full of blonde women with oil and gas husbands, teased hair, and Mercedes SUVs. The ubiquitous “cute top and jeans” is a “a cute top and white jeans” in Dallas—as if the lighter color made the heavy fabric more tolerable on a 110-degree day. In high school, my friends and I wore skinny white jeans to sit at the mall for hours, while our moms wore them to sip a single margarita at an open air restaurant.

Despite moving to Dallas on the cusp of puberty, I never felt like I was really from the city until I left it. For my 17th birthday, my mom took me and my friend Amber, to Cavender’s, an airplane hangar–size Westernwear emporium in a strip mall off the highway. Amber and I had both spent most of our lives outside of the U.S., but came from southern families who always made it clear that Texas was Home—even if we didn’t really get it yet. And, we didn’t have boots.

For most shoe purchases, I rely on gut instinct: Do I like it? Can I wear it? But boot shopping was different—I imagine it’s similar to buying a wedding dress, in the sense that you’re overwhelmed by how many slight variations of one item can exist. I carefully weighed the merits of square toes, pointed toes, the cowboy boot–specific “punchy toe” (somewhere between square and round) and “snip toe” (extra pointy). I knew I wanted something girly, but how girly? Would a white, snakeskin-embossed pair be too much? Yes. But would a plain black pair with distinct Western stitching not be special enough? I eventually selected a brown leather pair that hit just under the knee, with a stacked block heel and a snipped toe. Cutouts on the leather revealed embossed detailing, and a pretty floral embroidery ran up the side. The salesperson insisted that they would look better as they were worn in.

Cowboy boots were always appropriate, like a pair of sensible flats. Many of my classmates had special pairs done up in their college colors to wear to tailgates—burnt orange for the University of Texas, red for Texas Tech, maroon for A&M, and purple for TCU. As seniors in high school, boys were allowed to wear cowboy boots with their gray slacks. I loved how the distinctive toes just barely poked out as they walked around the school, a vestige of personality in the otherwise standard-issue uniform. Mostly, I wore them to visit my extended family outside of May, Texas, where walking through the ranch with a healthy fear of rattlesnakes made boots the only practical choice, even if I wore them with Nike shorts and oversized Comfort Colors T-shirts. They came out for a themed day my senior year—worn with plaid uniforms and bolo ties—but day-to-day use felt a bit more complicated. Cowboy boots can swallow any outfit, and they are itchy with connotations: Yes, I’m from Texas, but no, not like that. I don’t remember wearing them much in college, but if you asked my friends, I wore them every day, resting them on top of my desk at the start of class. Though the traction isn’t great, they still survived four Chicago winters.

During this period, my boots gathered dust. Anytime I wore them, the outfit faded by 2 p.m. and felt like a sign that read “newbie!”

My style shifted when I got an internship, then a job, at a magazine in New York. Everything I thought I knew about writing or fashion or politics or art took on a new bent. As the names Phoebe Philo and Issey Miyake entered my daily lexicon, I had no idea how to dress anymore. My most fashionable colleagues wore clothes that toed the line between beautiful and ugly: intimidatingly voluminous dresses, layered, oversized silhouettes. They dressed like they started their day having already solved a puzzle. I admired their confident idiosyncrasies—strong ambivalence towards Joan Didion, repulsion toward brown leather boots—and seeing the way these variants were celebrated, I wanted to develop my own. During this period, my boots gathered dust. Anytime I wore them, the outfit faded by 2 p.m. and felt like a sign that read “newbie!” Still, they felt central to my personal style. So I carted them along, and let them take up one of the 400 square feet in my apartment.

The resurgence of cowboy boots as a trend was fascinating to watch. Like so many other trends from the late 2010s—dad sneakers, bike shorts, wide-leg, cropped pants—it seemed like a challenge. How do you make these look good? But there was Raf Simons at Calvin Klein in 2017, with his Warholian take on Americana; Virgil Abloh with his “For Walking” pair; and Ganni’s high-gloss black and white version. What I admired from afar was the popularity of the campy cowboy, exemplified by Lil Nas X and Dolly Parton, and the long-overdue appreciation of Black Western style. “This,” I thought, “I can love, but don’t need to try.” Watching this play out solidified my affection for my own pair, which are resolutely not trendy—beat-up, broken-in, and a firm connection to something.

A few years ago, in the midst of a New York Fashion Week, I got into an elevator, dripping wet from the rain, and noticed someone else’s worn-in boots with a punchy toe. Two minutes later, guided by the shorthand of our footwear, we identified that we had been to the same summer camp. After almost a decade of negotiating how to wear them, I think I figured it out: With just the snip toe showing under some wide-leg jeans. At long last, I’ve wrangled the boots to whisper, rather than shout, what I want them to.